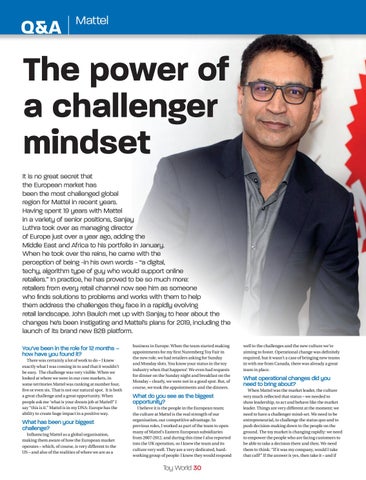 The power of a challenger mindset It is no great secret that the European market has been the most challenged global region for Mattel in recent years. Having spent 19 years with Mattel in a variety of senior positions, Sanjay Luthra took over as managing director of Europe just over a year ago, adding the Middle East and Africa to his portfolio in January. When he took over the reins, he came with the perception of being -in his own words - “a digital, techy, algorithm type of guy who would support online retailers.” In practice, he has proved to be so much more: retailers from every retail channel now see him as someone who finds solutions to problems and works with them to help them address the challenges they face in a rapidly evolving retail landscape. John Baulch met up with Sanjay to hear about the changes he’s been instigating and Mattel’s plans for 2019, including the launch of its brand new B2B platform. You’ve been in the role for 12 months – how have you found it? There was certainly a lot of work to do – I knew exactly what I was coming in to and that it wouldn’t be easy. The challenge was very visible. When we looked at where we were in our core markets, in some territories Mattel was ranking at number four, five or even six. That is not our natural spot. It is both a great challenge and a great opportunity. When people ask me ‘what is your dream job at Mattel?’ I say “this is it.” Mattel is in my DNA: Europe has the ability to create huge impact in a positive way.

What has been your biggest challenge? Influencing Mattel as a global organisation, making them aware of how the European market operates – which, of course, is very different to the US – and also of the realities of where we are as a

business in Europe. When the team started making appointments for my first Nuremberg Toy Fair in the new role, we had retailers asking for Sunday and Monday slots. You know your status in the toy industry when that happens! We even had requests for dinner on the Sunday night and breakfast on the Monday – clearly, we were not in a good spot. But, of course, we took the appointments and the dinners.

What do you see as the biggest opportunity? I believe it is the people in the European team; the culture at Mattel is the real strength of our organisation, our competitive advantage. In previous roles, I worked as part of the team to open many of Mattel’s Eastern European subsidiaries from 2007-2012, and during this time I also reported into the UK operation, so I knew the team and its culture very well. They are a very dedicated, hardworking group of people: I knew they would respond

well to the challenges and the new culture we’re aiming to foster. Operational change was definitely required, but it wasn’t a case of bringing new teams in with me from Canada, there was already a great team in place.

What operational changes did you need to bring about? When Mattel was the market leader, the culture very much reflected that status – we needed to show leadership, to act and behave like the market leader. Things are very different at the moment; we need to have a challenger mind-set. We need to be entrepreneurial, to challenge the status quo and to push decision-making down to the people on the ground. The toy market is changing rapidly: we need to empower the people who are facing customers to be able to take a decision there and then. We need them to think: “If it was my company, would I take that call?” If the answer is yes, then take it – and if