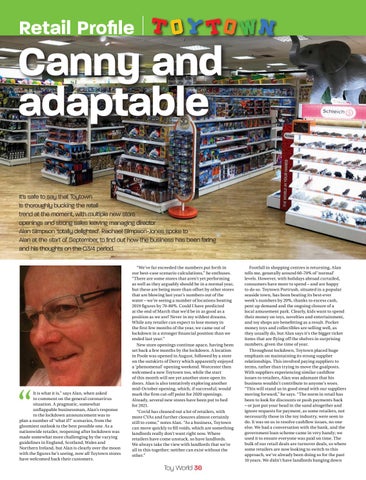 Canny and adaptable It’s safe to say that Toytown is thoroughly bucking the retail trend at the moment, with multiple new store openings and strong sales leaving managing director Alan Simpson ‘totally delighted’. Rachael Simpson-Jones spoke to Alan at the start of September, to find out how the business has been faring and his thoughts on the Q3/4 period.

It is what it is,” says Alan, when asked to comment on the general coronavirus situation. A pragmatic, somewhat unflappable businessman, Alan’s response to the lockdown announcement was to plan a number of ‘what if?’ scenarios, from the gloomiest outlook to the best possible one. As a nationwide retailer, reopening after lockdown was made somewhat more challenging by the varying guidelines in England, Scotland, Wales and Northern Ireland, but Alan is clearly over the moon with the figures he’s seeing, now all Toytown stores have welcomed back their customers.

“We’ve far exceeded the numbers put forth in our best-case scenario calculations,” he enthuses. “There are some stores that aren’t yet performing as well as they arguably should be in a normal year, but these are being more than offset by other stores that are blowing last year’s numbers out of the water – we’re seeing a number of locations beating 2019 figures by 70-80%. Could I have predicted at the end of March that we’d be in as good as a position as we are? Never in my wildest dreams. While any retailer can expect to lose money in the first few months of the year, we came out of lockdown in a stronger financial position than we ended last year.” New store openings continue apace, having been set back a few months by the lockdown. A location in Poole was opened in August, followed by a store on the outskirts of Derry which apparently enjoyed a ‘phenomenal’ opening weekend. Worcester then welcomed a new Toytown too, while the start of this month will see yet another store open its doors. Alan is also tentatively exploring another mid-October opening, which, if successful, would mark the firm cut-off point for 2020 openings. Already, several new stores have been put to bed for 2021. “Covid has cleaned out a lot of retailers, with more CVAs and further closures almost certainly still to come,” notes Alan. “As a business, Toytown can move quickly to fill voids, which are something landlords really don’t want right now. Where retailers have come unstuck, so have landlords. We always take the view with landlords that we’re all in this together; neither can exist without the other.”

Footfall in shopping centres is returning, Alan tells me, generally around 60-70% of ‘normal’ levels. However, with holidays abroad curtailed, consumers have more to spend – and are happy to do so. Toytown Portrush, situated in a popular seaside town, has been beating its best-ever week’s numbers by 20%, thanks to excess cash, pent up demand and the ongoing closure of a local amusement park. Clearly, kids want to spend their money on toys, novelties and entertainment, and toy shops are benefitting as a result. Pocket money toys and collectibles are selling well, as they usually do, but Alan says it’s the bigger ticket items that are flying off the shelves in surprising numbers, given the time of year. Throughout lockdown, Toytown placed huge emphasis on maintaining its strong supplier relationships. This involved paying suppliers to terms, rather than trying to move the goalposts. With suppliers experiencing similar cashflow issues to retailers, Alan was adamant that his business wouldn’t contribute to anyone’s woes. “This will stand us in good stead with our suppliers moving forward,” he says. “The norm in retail has been to look for discounts or push payments back – or just put your head in the sand altogether and ignore requests for payment, as some retailers, not necessarily those in the toy industry, were seen to do. It was on us to resolve cashflow issues, no one else. We had a conversation with the bank, and the government loan scheme came in very handy; we used it to ensure everyone was paid on time. The bulk of our retail deals are turnover deals, so where some retailers are now looking to switch to this approach, we’ve already been doing so for the past 10 years. We didn’t have landlords banging down