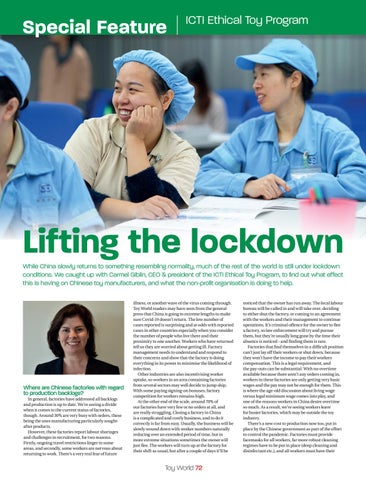 Lifting the lockdown While China slowly returns to something resembling normality, much of the rest of the world is still under lockdown conditions. We caught up with Carmel Giblin, CEO &amp; president of the ICTI Ethical Toy Program, to find out what effect this is having on Chinese toy manufacturers, and what the non-profit organisation is doing to help.

Where are Chinese factories with regard to production backlogs? In general, factories have addressed all backlogs and production is up to date. We’re seeing a divide when it comes to the current status of factories, though. Around 30% are very busy with orders, these being the ones manufacturing particularly soughtafter products. However, these factories report labour shortages and challenges in recruitment, for two reasons. Firstly, ongoing travel restrictions linger in some areas, and secondly, some workers are nervous about returning to work. There’s a very real fear of future

illness, or another wave of the virus coming through. Toy World readers may have seen from the general press that China is going to extreme lengths to make sure Covid-19 doesn’t return. The low number of cases reported is surprising and at odds with reported cases in other countries especially when you consider the number of people who live there and their proximity to one another. Workers who have returned tell us they are worried about getting ill. Factory management needs to understand and respond to their concerns and show that the factory is doing everything in its power to minimise the likelihood of infection. Other industries are also incentivising worker uptake, so workers in an area containing factories from several sectors may well decide to jump ship. With some paying signing-on bonuses, factory competition for workers remains high. At the other end of the scale, around 70% of our factories have very few or no orders at all, and are really struggling. Closing a factory in China is a complicated and costly business, and to do it correctly is far from easy. Usually, the business will be slowly wound down with worker numbers naturally reducing over an extended period of time, but in more extreme situations sometimes the owner will just flee. The workers will turn up at the factory for their shift as usual, but after a couple of days it’ll be

noticed that the owner has run away. The local labour bureau will be called in and will take over, deciding to either shut the factory, or coming to an agreement with the workers and their management to continue operations. It’s criminal offence for the owner to flee a factory, so law enforcement will try and pursue them, but they’re usually long gone by the time their absence is noticed - and finding them is rare. Factories that find themselves in a difficult position can’t just lay off their workers or shut down, because they won’t have the income to pay their workers compensation. This is a legal requirement, and the pay-outs can be substantial. With no overtime available because there aren’t any orders coming in, workers in these factories are only getting very basic wages and the pay may not be enough for them. This is where the age-old discussion about living wage versus legal minimum wage comes into play, and one of the reasons workers in China desire overtime so much. As a result, we’re seeing workers leave for busier factories, which may be outside the toy industry. There’s a new cost to production now too, put in place by the Chinese government as part of the effort to control the pandemic. Factories must provide facemasks for all workers, far more robust cleaning regimes have to be put in place (deep cleaning and disinfectant etc.), and all workers must have their