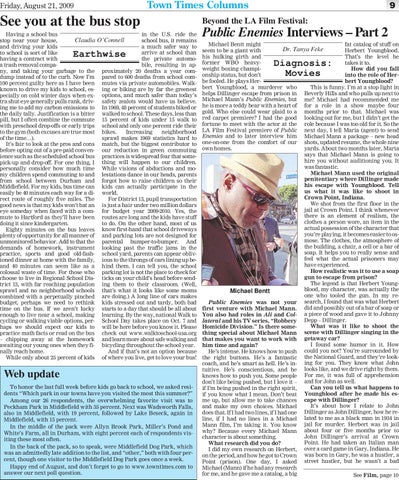 See you at the bus stop

Having a school bus Claudia stop near your house, and driving your kids to school is sort of like having a contract with a trash removal company, and taking your garbage to the dump instead of to the curb. Now I’m 100 percent guilty here as I have been known to drive my kids to school, especially on cold winter days when extra shut-eye generally pulls rank, driving me to add my carbon emissions to the daily tally. Justification is a bitter pill, but I often combine the commute with preschool drop-offs or early trips to the gym (both excuses are true most of the time…). It’s fair to look at the pros and cons before opting out of a pre-paid convenience such as the scheduled school bus pick-up and drop-off. For one thing, I personally consider how much time my children spend commuting to and from school between Durham and Middlefield. For my kids, bus time can easily be 40 minutes each way for a direct route of roughly five miles. The good news is that my kids won’t bat an eye someday when faced with a commute to Hartford as they’ll have been doing it since kindergarten. Eighty minutes on the bus leaves plenty of opportunity for all manner of unmonitored behavior. Add to that the demands of homework, instrument practice, sports and good old-fashioned dinner at home with the family, and 40 minutes can seem like as a colossal waste of time. For those who choose to live in Regional School District 13, with far reaching population sprawl and no neighborhood schools combined with a perpetually pinched budget, perhaps we need to rethink time on the bus. If we aren’t lucky enough to live near a school, making cycling or walking viable options, perhaps we should expect our kids to practice math facts or read on the bus – chipping away at the homework awaiting our young ones when they finally reach home. While only about 25 percent of kids

in the U.S. ride the school bus, it remains a much safer way to arrive at school than the private automobile, resulting in approximately 20 deaths a year compared to 600 deaths from school commutes via private automobiles. Walking or biking are by far the greenest options, and much safer than today’s safety zealots would have us believe. In 1969, 48 percent of students biked or walked to school. These days, less than 15 percent of kids under 15 walk to school and only one percent ride their bikes. Increasing neighborhood sprawl makes 1969 statistics hard to match, but the biggest contributor to our reduction in green commuting practices is widespread fear that something will happen to our children. While visions of abductions and molestations dance in our heads, parents forgot how to raise children so their kids can actually participate in the world. For District 13, pupil transportation is just a hair under two million dollars for budget year 2009-2010. Yes, the routes are long and the kids have stuff to do. On the other hand, most of us know first-hand that school driveways and parking lots are not designed for parental bumper-to-bumper. And looking past the traffic jams in the school yard, parents can appear oblivious to the throngs of cars lining up behind them. I can tell you, the school parking lot is not the place to check for ticks on your child’s head before sending them to their classroom. (Well, that’s what it looks like some moms are doing.) A long line of cars makes kids stressed out and tardy, both bad starts to a day that should be all about learning. By the way, national Walk to School Day takes place on Oct. 7 and will be here before you know it. Please check out www.walktoschool-usa.org and learn more about safe walking and bicycling throughout the school year. And if that’s not an option because of where you live, get to love your bus!

Web update To honor the last full week before kids go back to school, we asked residents “Which park in our towns have you visited the most this summer?” Among our 26 respondents, the overwhelming favorite visit was to Peckham Park in Middlefield with 35 percent. Next was Wadsworth Falls, also in Middlefield, with 19 percent, followed by Lake Beseck, again in Middlefield, with 15 percent. In the middle of the pack were Allyn Brook Park, Miller’s Pond and White’s Farm, all in Durham, with eight percent each of respondents visiting these most often. In the back of the pack, so to speak, were Middlefield Dog Park, which was an admittedly late addition to the list, and “other,” both with four percent, though one visitor to the Middlefield Dog Park goes once a week. Happy end of August, and don’t forget to go to www.towntimes.com to answer our next poll question.

Beyond the LA Film Festival:

Michael Bentt might fat catalog of stuff on Dr. Tanya Feke seem to be a giant with Herbert Youngblood. his hulking girth and That’s the level he former WBO heavytakes it to. weight boxing champiHow did you fall onship status, but don’t into the role of Herbe fooled. He plays Herbert Youngblood? bert Youngblood, a murderer who This is funny. I’m at a stop light in helps Dillinger escape from prison in Beverly Hills and who pulls up next to Michael Mann’s Public Enemies, but me? Michael had recommended me he is more a teddy bear with a heart of for a role in a show maybe four gold. Who else could wear plaid to a months prior to that. Michael was red carpet premiere? I had the good looking out for me, but I didn’t get the fortune to meet with the actor at the role because I was too old for it. So the LA Film Festival premiere of Public next day, I tell Maria (agent) to send Enemies and to later interview him Michael Mann a package – new head one-on-one from the comfort of our shots, updated resume, the whole nine own homes. yards. About two months later, Maria says that Michael Mann is going to hire you without auditioning you. It was fantastic. Michael Mann used the original penitentiary where Dillinger made his escape with Youngblood. Tell us what it was like to shoot in Crown Point, Indiana. We shot from the first floor in the jail at Crown Point. I think whenever there is an element of realism, the clothes a person wore, an item in the actual possession of the character that you’re playing, it becomes easier to osmose. The clothes, the atmosphere of the building, a chair, a cell or a bar of soap. It helps you to really sense and feel what the actual prisoners may have experienced. How realistic was it to use a soap gun to escape from prison? The legend is that Herbert Youngblood, my character, was actually the Michael Bentt one who tooled the gun. In my rePublic Enemies was not your search, I found that was what Herbert first venture with Michael Mann. did and possibly out of a bar of soap or You also had roles in Ali and Col- a piece of wood and gave it to Johnny lateral and his TV series, “Robbery Depp – Dillinger. What was it like to shoot the Homicide Division.” Is there something special about Michael Mann scene with Dillinger singing in the that makes you want to work with getaway car? I found some humor in it. How him time and again? He’s intense. He knows how to push could you not? You’re surrounded by the right buttons. He’s a fantastic the National Guard, and they’re lookcoach, and he’s smart as hell. He’s in- ing for you. They know what John tuitive. He’s conscientious, and he looks like, and we drive right by them. knows how to push you. Some people For me, it was full of apprehension don’t like being pushed, but I love it – and for John as well. Can you tell us what happens to if I’m being pushed in the right spirit, if you know what I mean. Don’t beat Youngblood after he made his esme up, but allow me to take chances cape with Dillinger? It’s about how I relate to John and make my own choices. Michael does that. If I had two lines, if I had one Dillinger as John Dillinger, how he reline, if I had no lines in a Michael lated to me as a black man in 1934 in Mann film, I’m taking it. You know jail for murder. Herbert was in jail why? Because every Michael Mann about four or five months prior to John Dillinger’s arrival at Crown character is about something. Point. He had taken an Italian man What research did you do? I did my own research on Herbert, over a card game in Gary, Indiana. He on the period, and how he got to Crown was born in Gary, he was a hustler, a Point (prison). One day, I asked street hustler, but he wasn’t a bad Michael (Mann) if he had any research for me, and he gave me a catalog, a big See Film, page 10

Web poll question The Durham Fair Foundation’s annual Tractor Cruise-In on Sunday, Aug. 16, was another success. As can be seen above, people of all ages love to drive tractors! More photos on page 14 and text on page 26. By Stephanie Wilcox Town Times Friday, August 21, 2009 Are you covered by health insurance? yes or no? See Powder Ridge, page 27 See Agriculture, page 11 Photo by Stephanie Wilcox 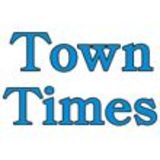