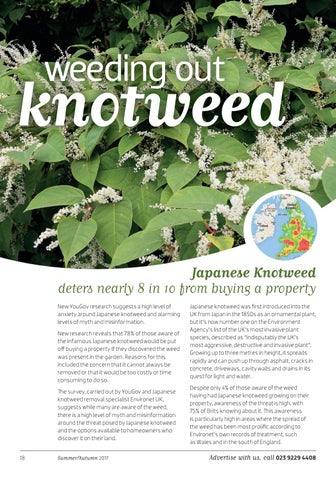 knotweed Japanese Knotweed deters nearly 8 in 10 from buying a property New youGov research suggests a high level of anxiety around Japanese knotweed and alarming levels of myth and misinformation. New research reveals that 78% of those aware of the infamous Japanese knotweed would be put off buying a property if they discovered the weed was present in the garden. Reasons for this included the concern that it cannot always be removed or that it would be too costly or time consuming to do so. The survey, carried out by youGov and Japanese knotweed removal specialist Environet uk, suggests while many are aware of the weed, there is a high level of myth and misinformation around the threat posed by Japanese knotweed and the options available to homeowners who discover it on their land. 18

Japanese knotweed was first introduced into the uk from Japan in the 1850s as an ornamental plant, but it’s now number one on the Environment Agency’s list of the uk’s most invasive plant species, described as “indisputably the UK’s most aggressive, destructive and invasive plant”. Growing up to three metres in height, it spreads rapidly and can push up through asphalt, cracks in concrete, driveways, cavity walls and drains in its quest for light and water. despite only 4% of those aware of the weed having had Japanese knotweed growing on their property, awareness of the threat is high, with 75% of Brits knowing about it. Th is awareness is particularly high in areas where the spread of the weed has been most prolific according to Environet’s own records of treatment, such as Wales and in the south of England.

Enjoying summer in the south…we certainly are, and it’s been a pretty good summer so far. This issue marks the end of our third year – I can’t believe how quickly it’s gone. On the subject of summer we’ve jam packed these pages with everything you need for the coming months. From spectacular summer salads, to sassy sangria sundowners. If you’re into seafood check out page 10 for a healthy modern twist. Get the buzz for beekeeping with our top tips and by this time next year you could have honey on tap. For those looking to get out of town for a day or more why not visit one of the countless national trust sites throughout the region. There’s colour and events galore for all the family. In the internet age it’s our responsibility to ensure our kids stay safe online, check out page 44 for a few pointers. If the virtual world doesn’t do it for you, why not sign up for an allotment and have a go at growing your own fruit and veg. Whatever makes you happy this summer, get involved! 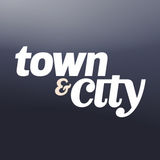