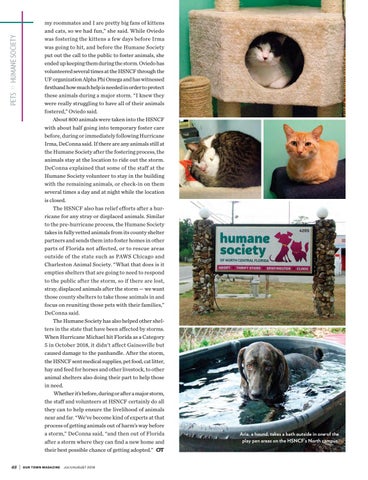 my roommates and I are pretty big fans of kittens and cats, so we had fun,” she said. While Oviedo was fostering the kittens a few days before Irma was going to hit, and before the Humane Society put out the call to the public to foster animals, she ended up keeping them during the storm. Oviedo has volunteered several times at the HSNCF through the UF organization Alpha Phi Omega and has witnessed firsthand how much help is needed in order to protect these animals during a major storm. “I knew they were really struggling to have all of their animals fostered,” Oviedo said. About 800 animals were taken into the HSNCF with about half going into temporary foster care before, during or immediately following Hurricane Irma, DeConna said. If there are any animals still at the Humane Society after the fostering process, the animals stay at the location to ride out the storm. DeConna explained that some of the staff at the Humane Society volunteer to stay in the building with the remaining animals, or check-in on them several times a day and at night while the location is closed. The HSNCF also has relief efforts after a hurricane for any stray or displaced animals. Similar to the pre-hurricane process, the Humane Society takes in fully vetted animals from its county shelter partners and sends them into foster homes in other parts of Florida not affected, or to rescue areas outside of the state such as PAWS Chicago and Charleston Animal Society. “What that does is it empties shelters that are going to need to respond to the public after the storm, so if there are lost, stray, displaced animals after the storm — we want those county shelters to take those animals in and focus on reuniting those pets with their families,” DeConna said. The Humane Society has also helped other shelters in the state that have been affected by storms. When Hurricane Michael hit Florida as a Category 5 in October 2018, it didn’t affect Gainesville but caused damage to the panhandle. After the storm, the HSNCF sent medical supplies, pet food, cat litter, hay and feed for horses and other livestock, to other animal shelters also doing their part to help those in need. Whether it’s before, during or after a major storm, the staff and volunteers at HSNCF certainly do all they can to help ensure the livelihood of animals near and far. “We’ve become kind of experts at that process of getting animals out of harm’s way before a storm,” DeConna said, “and then out of Florida after a storm where they can find a new home and their best possible chance of getting adopted.”  OUR TOWN MAGAZINE

Aria, a hound, takes a bath outside in one of the play pen areas on the HSNCF’s North campus.