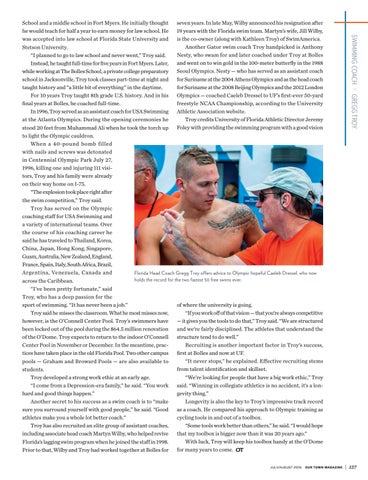 School and a middle school in Fort Myers. He initially thought seven years. In late May, Wilby announced his resignation after he would teach for half a year to earn money for law school. He 19 years with the Florida swim team. Martyn’s wife, Jill Wilby, was accepted into law school at Florida State University and is the co-owner (along with Kathleen Troy) of SwimAmerica. Another Gator swim coach Troy handpicked is Anthony Stetson University. Nesty, who swam for and later coached under Troy at Bolles “I planned to go to law school and never went,” Troy said. and went on to win gold in the 100-meter butterﬂy in the 1988 Instead, he taught full-time for ﬁve years in Fort Myers. Later, Seoul Olympics. Nesty — who has served as an assistant coach while working at The Bolles School, a private college preparatory school in Jacksonville, Troy took classes part-time at night and for Suriname at the 2004 Athens Olympics and as the head coach for Suriname at the 2008 Beijing Olympics and the 2012 London taught history and “a little bit of everything” in the daytime. For 10 years Troy taught 8th grade U.S. history. And in his Olympics — coached Caeleb Dressel to UF’s ﬁrst-ever 50-yard freestyle NCAA Championship, according to the University ﬁnal years at Bolles, he coached full-time. In 1996, Troy served as an assistant coach for USA Swimming Athletic Association website. Troy credits University of Florida Athletic Director Jeremy at the Atlanta Olympics. During the opening ceremonies he Foley with providing the swimming program with a good vision stood 20 feet from Muhammad Ali when he took the torch up to light the Olympic cauldron. When a 40-pound bomb filled with nails and screws was detonated in Centennial Olympic Park July 27, 1996, killing one and injuring 111 visitors, Troy and his family were already on their way home on I-75. “The explosion took place right after the swim competition,” Troy said. Troy has served on the Olympic coaching staff for USA Swimming and a variety of international teams. Over the course of his coaching career he said he has traveled to Thailand, Korea, China, Japan, Hong Kong, Singapore, Guam, Australia, New Zealand, England, France, Spain, Italy, South Africa, Brazil, Argentina, Venezuela, Canada and Florida Head Coach Gregg Troy offers advice to Olympic hopeful Caeleb Dressel, who now holds the record for the two fastest 50 free swims ever. across the Caribbean. “I’ve been pretty fortunate,” said Troy, who has a deep passion for the of where the university is going. sport of swimming. “It has never been a job.” “If you work off of that vision — that you’re always competitive Troy said he misses the classroom. What he most misses now, however, is the O’Connell Center Pool. Troy’s swimmers have — it gives you the tools to do that,” Troy said. “We are structured been locked out of the pool during the $64.5 million renovation and we’re fairly disciplined. The athletes that understand the of the O’Dome. Troy expects to return to the indoor O’Connell structure tend to do well.” Recruiting is another important factor in Troy’s success, Center Pool in November or December. In the meantime, practices have taken place in the old Florida Pool. Two other campus ﬁrst at Bolles and now at UF. “It never stops,” he explained. Effective recruiting stems pools — Graham and Broward Pools — are also available to from talent identiﬁcation and skillset. students. “We’re looking for people that have a big work ethic,” Troy Troy developed a strong work ethic at an early age. “I come from a Depression-era family,” he said. “You work said. “Winning in collegiate athletics is no accident, it’s a longevity thing.” hard and good things happen.” Longevity is also the key to Troy’s impressive track record Another secret to his success as a swim coach is to “make sure you surround yourself with good people,” he said. “Good as a coach. He compared his approach to Olympic training as cycling tools in and out of a toolbox. athletes make you a whole lot better coach.” “Some tools work better than others,” he said. “I would hope Troy has also recruited an elite group of assistant coaches, that my toolbox is bigger now than it was 20 years ago.” including associate head coach Martyn Wilby, who helped revive With luck, Troy will keep his toolbox handy at the O’Dome Florida’s lagging swim program when he joined the staff in 1998. Prior to that, Wilby and Troy had worked together at Bolles for for many years to come.