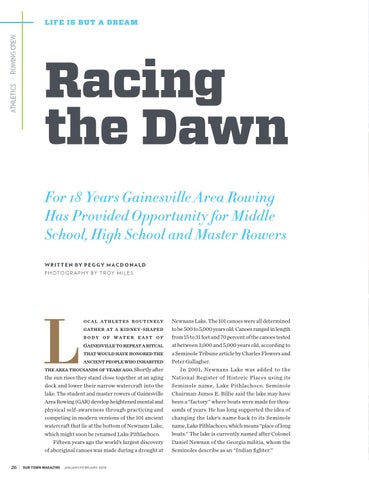 LIFE IS BUT A DREAM

ocal athletes routinely gather at a kidney-shaped b o d y o f wat e r e a s t o f Gainesville to repeat a ritual that would have honored the ancient people who inhabited the area thousands of years ago. Shortly after the sun rises they stand close together at an aging dock and lower their narrow watercraft into the lake. The student and master rowers of Gainesville Area Rowing (GAR) develop heightened mental and physical self-awareness through practicing and competing in modern versions of the 101 ancient watercraft that lie at the bottom of Newnans Lake, which might soon be renamed Lake Pithlachoco. Fifteen years ago the world’s largest discovery of aboriginal canoes was made during a drought at

Newnans Lake. The 101 canoes were all determined to be 500 to 5,000 years old. Canoes ranged in length from 15 to 31 feet and 70 percent of the canoes tested at between 3,000 and 5,000 years old, according to a Seminole Tribune article by Charles Flowers and Peter Gallagher. In 2001, Newnans Lake was added to the National Register of Historic Places using its Seminole name, Lake Pithlachoco. Seminole Chairman James E. Billie said the lake may have been a “factory” where boats were made for thousands of years. He has long supported the idea of changing the lake’s name back to its Seminole name, Lake Pithlachoco, which means “place of long boats.” The lake is currently named after Colonel Daniel Newnan of the Georgia militia, whom the Seminoles describe as an “Indian ﬁghter.”