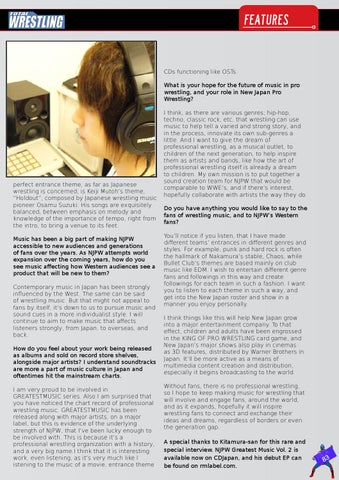 CDs functioning like OSTs. What is your hope for the future of music in pro wrestling, and your role in New Japan Pro Wrestling?

perfect entrance theme, as far as Japanese wrestling is concerned, is Keiji Mutoh’s theme, “Holdout”, composed by Japanese wrestling music pioneer Osamu Suzuki. His songs are exquisitely balanced, between emphasis on melody and knowledge of the importance of tempo, right from the intro, to bring a venue to its feet. Music has been a big part of making NJPW accessible to new audiences and generations of fans over the years. As NJPW attempts world expansion over the coming years, how do you see music affecting how Western audiences see a product that will be new to them? Contemporary music in Japan has been strongly influenced by the West. The same can be said of wrestling music. But that might not appeal to fans by itself, it’s down to us to pursue music and sound cues in a more individualist style. I will continue to aim to make music that affects listeners strongly, from Japan, to overseas, and back. How do you feel about your work being released as albums and sold on record store shelves, alongside major artists? I understand soundtracks are more a part of music culture in Japan and oftentimes hit the mainstream charts. I am very proud to be involved in GREATESTMUSIC series. Also I am surprised that you have noticed the chart record of professional wrestling music. GREATESTMUSIC has been released along with major artists, on a major label, but this is evidence of the underlying strength of NJPW, that I’ve been lucky enough to be involved with. This is because it’s a professional wrestling organization with a history, and a very big name.I think that it is interesting work, even listening, as it’s very much like l istening to the music of a movie, entrance theme

I think, as there are various genres; hip-hop, techno, classic rock, etc, that wrestling can use music to help tell a varied and strong story, and in the process, innovate its own sub-genres a little. And I want to give the dream of professional wrestling, as a musical outlet, to children of the next generation, to help inspire them as artists and bands, like how the art of professional wrestling itself is already a dream to children. My own mission is to put together a sound creation team for NJPW that would be comparable to WWE’s, and if there’s interest, hopefully collaborate with artists the way they do. Do you have anything you would like to say to the fans of wrestling music, and to NJPW’s Western fans? You’ll notice if you listen, that I have made different teams’ entrances in different genres and styles. For example, punk and hard rock is often the hallmark of Nakamura’s stable, Chaos, while Bullet Club’s themes are based mainly on club music like EDM. I wish to entertain different genre fans and followings in this way and create followings for each team in such a fashion. I want you to listen to each theme in such a way, and get into the New Japan roster and show in a manner you enjoy personally. I think things like this will help New Japan grow into a major entertainment company. To that effect, children and adults have been engrossed in the KING OF PRO WRESTLING card game, and New Japan’s major shows also play in cinemas as 3D features, distributed by Warner Brothers in Japan. It’ll be more active as a means of multimedia content creation and distribution, especially it begins broadcasting to the world. Without fans, there is no professional wrestling, so I hope to keep making music for wrestling that will involve and engage fans, around the world, and as it expands, hopefully it will inspire wrestling fans to connect and exchange their ideas and dreams, regardless of borders or even the generation gap. A special thanks to Kitamura-san for this rare and special interview. NJPW Greatest Music Vol. 2 is available now on CDJapan, and his debut EP can be found on rmlabel.com. 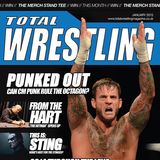