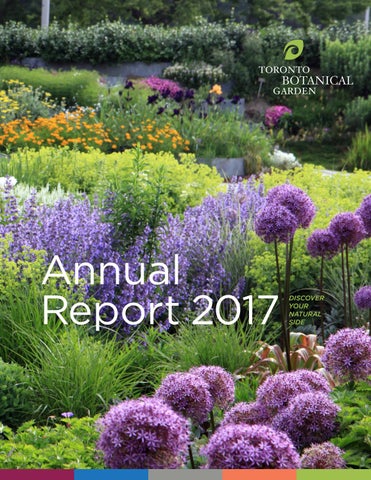 DISCOVER YOUR NATURAL SIDE

TBG connects people to plants, inspiring us to live in harmony with nature. Our Vision

TBG WILL BE RENOWNED FOR

ITS DISPLAY OF NATURE’S BEAUTY

AND AS A DYNAMIC HUB FOR

A New Beginning OUR YEAR CAME TO A CLOSE with Toronto Botanical Garden set to enter a phase of unprecedented growth. With our partner, the City of Toronto, we spent 2017 planning for the creation of a world-class cultural institution that advances our capacity to fulfil a botanical gardenâ&amp;#x20AC;&amp;#x2122;s mandated activities of education, conservation, research and horticultural display. The Gardens Our first-rate plant collections and displays continued to educate, inspire and give pleasure to our visitors and members. Education Programming Through classroom and hands-on learning, and with the introduction of a garden app, we engaged visitors of all ages. Community of Supporters TBG members, volunteers, donors and the corporate community supported our core programs and contributed to our expansion plans. New Relationships Through strategic partnerships, including our collaboration with the City of Toronto, we extended our footprint and reached out to new audiences.

TBGâ&amp;#x20AC;&amp;#x2122;s overall business operations concluded on a positive note for the fourth year in a row, closing its books for 2017 with a net positive balance of $4,414. Together, the Board of Directors and the management team have steered TBG into what will be a very pivotal 2018. We look forward to welcoming and engaging with visitors and program participants while further solidifying our foundation, transforming TBG into a world-class destination.

The Year in Review Expansion Project Toronto Botanical Garden reached several important milestones in 2017, in pursuit of its plans to expand by a further 30 acres: Our partnership potential was incorporated into the City of Toronto’s Ravine Strategy: TBG is positioned as an early deliverable of the strategy, in providing a “natural, connected sanctuary essential for the health and well-being of the city.” The City-funded Master Plan and Management Plan Study was completed with the support of TBG staff, including hosting three public consultation events and a design charrette with stakeholders. A campaign feasibility study was also completed to assess the community’s capacity for joining the government’s support for the expansion plan. Organizational capacity was enhanced to strengthen business strategy leading to sustained organizational growth. We ended 2017 with a consensus that a world-class botanical garden could be created by combining the landscapes of TBG and Edwards Gardens under an effective TBG/City partnership.

“ I WAS VERY EXCITED TO HEAR ABOUT TBG’S EXPANSION WHEN I WENT TO NIKI JABBOUR’S LECTURE. I AM 13 YEARS OLD, AND HAD MY VERY FIRST PLANT SALE THIS SPRING, AT WHICH I SOLD OVER 100 PLANTS. THE ENCLOSED DONATION FOR TBG’S EXPANSION WAS RAISED AT MY PLANT SALE. I CAN’T WAIT TO SEE, AND WATCH TBG GET EVEN BIGGER AND BETTER.” —Emma Biggs

Our Collection There are 2,604 taxa in the Garden, representing a broad range of species and cultivars. In 2017, we also added approximately 20,300 new spring-flowering bulbs. Our horticultural team includes 32 volunteers who contributed more than 4,000 hours assisting with the organic maintenance of our 17 themed gardens, with a priority of increasing biodiversity, supporting pollinators and managing invasive species. Membership TBG Memberships surpassed 2,000 households, representing an increase of more than 600 new members from 2016 and contributing 104% of the membership fees goal. Volunteers TBG’s dedicated volunteers offer their passion and skills to ensure we fulfil our mission and create important connections between plants, conservation and community. This year, 475 volunteers worked a total of 18,000 hours to help support our events, services, education programs and tour activities. Two of our volunteers won the Member of Provincial Parliament 8th annual Volunteer Service Award for outstanding contributions to the lives of people in and beyond the Don Valley West riding: Congratulations to Jean McCluskey and Donna Tuttle. Jean also won the Ontario Volunteer Service Award 2017 in recognition of her 35 years of service.

Horticultural Outreach Across North America and Canada Blooms Our horticultural team participated in more than 40 speaking engagements in Canada and the U.S. in 2017, addressing more than 4,500 people. From May through September, TBG reached CBC Radio listeners during a live, weekly spot with Director of Horticulture Paul Zammit. A 1,500-square-foot retail display at Canada Blooms drew many garden-lovers, raising TBG awareness. The 10-day public show exceeded our budgeted sales target, with more than 5,400 transactions, 120 memberships and $119,000 in sales. Environmentalist of the Year Award TBG recognized Minaz Asani Kanji, manager of outreach for Park People, with the 2017 Environmentalist of the Year award. In addition, Aidan Dahlin Nolan and Alan Colley were the recipients of Rising Star awards, which recognize early-career individuals whose efforts demonstrate a commitment and a promise of significant achievement in environmental enhancement. All award recipients were selected by a committee of peers from the environmental sector. The cash awards were generously supported by The Dalglish Family Foundation and The Jackman Foundation. The Monica van Maris Green Professionals Woman of Influence Award Presented in partnership by Landscape Ontario Horticultural Trades Association and TBG, this award was established in 2017 and dedicated to Monica van Maris in recognition of her pioneering achievements as a green professional. In the future, this award will highlight women whose work and vision have made an impact in the green industry. Through the Garden Gate: North Rosedale &amp; Moore Park Torontoâ&amp;#x20AC;&amp;#x2122;s largest tour of private gardens is organized by TBG and it celebrated 30 years of operation this year, showcasing 30 beautiful private gardens in the North RosedaleBennington Heights area. Hundreds of garden lovers joined the celebration. Music in the Garden Our free Edwards Summer Music Series in the Edwards Gardens courtyard showcased 10 musical artists with almost 6,000 in attendance. The series is generously supported by The Edwards Charitable Foundation. Celebrity Fan! Dr. Brian May, lead guitarist of the rock band Queen (with a PhD in astrophysics!), chose to celebrate his 70th birthday with a tour of the TBG.

Sustainability TBG made its building more wildlife-friendly by treating two large windows with DIY feather-friendly tape to make glass more visible to birds. In addition to our sustainable horticultural practices, TBG initiated a number of waste-diversion procedures and practices in 2017, including organic waste (green bin) collection, on-site composting of floral design waste, beyond-blue-bin recycling with Terracycle and staffed waste stations at all events. The Garden Gives Back This year, we were able to donate 120 lbs. of food to the North York Harvest Food Bank— 20 lb. from the Kitchen Garden and 100 lbs. from the Children’s Teaching Garden. Plant Trials: Roses Through a donation by Proven Winners and Sheridan Nurseries, we trialed 30 At Last (Rosa ‘HORCOGJIL’) landscape roses a year before they were available to the public. Adult Education Approximately 2,200 adults participated in 79 courses and one symposium this year. The most popular courses in adult education included Floral Design, Horticultural Therapy, Garden Design and Botanical Art. In November, the 2nd annual Ravine Symposium gathered together 150 ravine enthusiasts for talks, tours and networking.

“ THESE FOCUSED COURSES ARE VERY HELPFUL. LOTS OF IDEAS! WE WILL BE TAKING MORE OF THEM.” Children’s Education TBG’s March Break Camp ran at near capacity and our Summer Camp programs were sold out. Approximately 7,800 children participated in spring break and summer camps, sleepovers, school visits and more.

“ TBG ADDRESSES SO MANY ASPECTS OF GARDENING IN SUCH A WAY THAT STUDENTS REMEMBER WHAT THEY LEARNED, THANKS TO ALL THE HANDS-ON EXPERIENCE.”

Children learning and engaging with nature in the Teaching Garden.

Thank You, 2017 Supporters! TORONTO BOTANICAL GARDEN GRATEFULLY ACKNOWLEDGES THE GENEROSITY of our donors, whose multi-year support of our mandate continues to help us achieve our long-term goals. Annual contributions from our valued corporations and foundations, from our members and through commemorative memorial plantings, are critical to sustaining our activities, programs, events and exhibitions. Woman to Woman: Lunch in the Garden Annual Signature Fundraiser This highly anticipated annual luncheon in the garden attracted a record crowd who enjoyed culinary delights, complimentary mini-spa services, the excitement of the Hat and Fascinator competition and a fabulous day in the garden. Our guests, sponsors and patrons joined their efforts to raise more than $140,000 in support of TBG’s education and horticultural programs. 2017 WOMAN TO WOMAN COMMITTEE Cynthia Webb, Committee Chair Anna Buchanan Gina Burton Lindsay Dale-Harris Sara D’Elia Kathy Dembroski Janet Greyson Sue Howe Penny Richards Laura Stewart

Through the Garden Gate The 2017 Through the Garden Gate committee supported the event in celebration of 30 years of spectacular garden touring, along with our valued sponsors and partners. 2017 THROUGH THE GARDEN GATE COMMITTEE Honorary Chair: Mark Cullen Petra Donnelly, Scout Coordinator Barbara Evans, Scout Coordinator Denis Flanagan, Board Member 6|

NOTES 1. The above Statement of Operations provides a summary of the TBG financial activity for 2016 and 2017. Financial statements for the 2017 fiscal year (January 1, 2017 to December 31, 2017) were audited by Rosenswig, McRae Thorpe LLP. 2. Deferred contributions relate to the excess revenues over expenditures received for the revitalization of the building and grounds located at 777 Lawrence Avenue East. Deferred contributions are amortized into revenue on the same basis as the amortization related to the leasehold improvements.

TBG continues to raise awareness about the importance of planting for and attracting pollinators to the garden. Photo: Paul Zammit

TBG is viewed as a reflective space to celebrate the life of a loved one with a memorial planting, with proceeds supporting the garden— in 2017, memorial donations achieved 300% of their target. 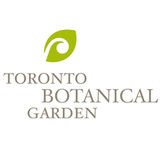