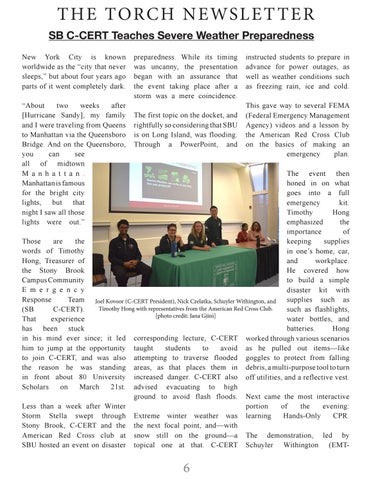 T H E T O R C H N EWSL E T T E R SB C-CERT Teaches Severe Weather Preparedness New York City is known worldwide as the “city that never sleeps,” but about four years ago parts of it went completely dark. “About two weeks after [Hurricane Sandy], my family and I were traveling from Queens to Manhattan via the Queensboro Bridge. And on the Queensboro, you can see all of midtown M a n h a t t a n . Manhattan is famous for the bright city lights, but that night I saw all those lights were out.”

preparedness. While its timing was uncanny, the presentation began with an assurance that the event taking place after a storm was a mere coincidence. The first topic on the docket, and rightfully so considering that SBU is on Long Island, was flooding. Through a PowerPoint, and

instructed students to prepare in advance for power outages, as well as weather conditions such as freezing rain, ice and cold. This gave way to several FEMA (Federal Emergency Management Agency) videos and a lesson by the American Red Cross Club on the basics of making an emergency plan.

The event then honed in on what goes into a full emergency kit. Timothy Hong emphasized the importance of Those are the keeping supplies words of Timothy in one’s home, car, Hong, Treasurer of and workplace. the Stony Brook He covered how Campus Community to build a simple E m e r g e n c y disaster kit with Response Team Joel Kovoor (C-CERT President), Nick Czelatka, Schuyler Withington, and supplies such as Timothy Hong with representatives from the American Red Cross Club. (SB C-CERT). such as flashlights, [photo credit: Jana Gjini] That experience water bottles, and has been stuck batteries. Hong in his mind ever since; it led corresponding lecture, C-CERT worked through various scenarios him to jump at the opportunity taught students to avoid as he pulled out items—like to join C-CERT, and was also attempting to traverse flooded goggles to protect from falling the reason he was standing areas, as that places them in debris, a multi-purpose tool to turn in front about 80 University increased danger. C-CERT also off utilities, and a reflective vest. Scholars on March 21st. advised evacuating to high ground to avoid flash floods. Next came the most interactive Less than a week after Winter portion of the evening: Storm Stella swept through Extreme winter weather was learning Hands-Only CPR. Stony Brook, C-CERT and the the next focal point, and—with American Red Cross club at snow still on the ground—a The demonstration, led by SBU hosted an event on disaster topical one at that. C-CERT Schuyler Withington (EMT-