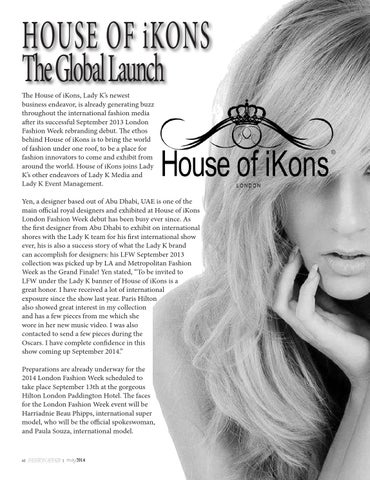 HOUSE OF iKONS The Global Launch

The House of iKons, Lady K’s newest business endeavor, is already generating buzz throughout the international fashion media after its successful September 2013 London Fashion Week rebranding debut. The ethos behind House of iKons is to bring the world of fashion under one roof, to be a place for fashion innovators to come and exhibit from around the world. House of iKons joins Lady K’s other endeavors of Lady K Media and Lady K Event Management.

Yen, a designer based out of Abu Dhabi, UAE is one of the main official royal designers and exhibited at House of iKons London Fashion Week debut has been busy ever since. As the first designer from Abu Dhabi to exhibit on international shores with the Lady K team for his first international show ever, his is also a success story of what the Lady K brand can accomplish for designers: his LFW September 2013 collection was picked up by LA and Metropolitan Fashion Week as the Grand Finale! Yen stated, “To be invited to LFW under the Lady K banner of House of iKons is a great honor. I have received a lot of international exposure since the show last year. Paris Hilton also showed great interest in my collection and has a few pieces from me which she wore in her new music video. I was also contacted to send a few pieces during the Oscars. I have complete confidence in this show coming up September 2014.” Preparations are already underway for the 2014 London Fashion Week scheduled to take place September 13th at the gorgeous Hilton London Paddington Hotel. The faces for the London Fashion Week event will be Harriadnie Beau Phipps, international super model, who will be the official spokeswoman, and Paula Souza, international model. 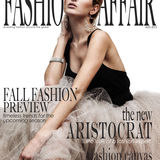