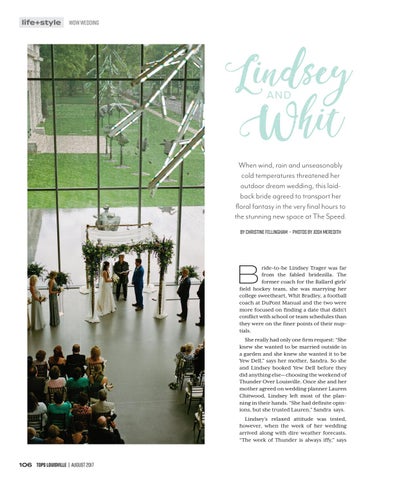 When wind, rain and unseasonably cold temperatures threatened her outdoor dream wedding, this laidback bride agreed to transport her floral fantasy in the very final hours to the stunning new space at The Speed. By Christine Fellingham • Photos By Josh Meredith

ride-to-be Lindsey Trager was far from the fabled bridezilla. The former coach for the Ballard girls’ field hockey team, she was marrying her college sweetheart, Whit Bradley, a football coach at DuPont Manual and the two were more focused on finding a date that didn’t conflict with school or team schedules than they were on the finer points of their nuptials. She really had only one firm request: “She knew she wanted to be married outside in a garden and she knew she wanted it to be Yew Dell,” says her mother, Sandra. So she and Lindsey booked Yew Dell before they did anything else— choosing the weekend of Thunder Over Louisville. Once she and her mother agreed on wedding planner Lauren Chitwood, Lindsey left most of the planning in their hands. “She had definite opinions, but she trusted Lauren,” Sandra says. Lindsey’s relaxed attitude was tested, however, when the week of her wedding arrived along with dire weather forecasts. “The week of Thunder is always iffy,” says