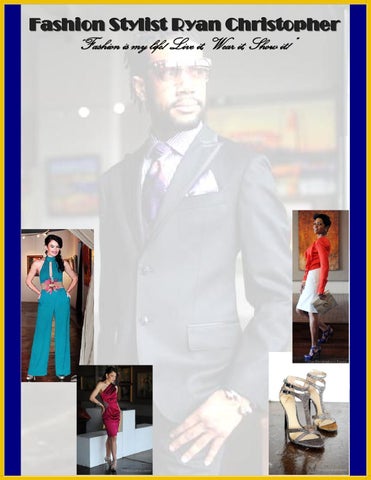 Fashion Stylist Ryan Christopher ”Fashion is my life! Live it, Wear it, Show it!”

Birmingham stylist Ryan Christopher is in the business of making people look good. He talks to clients to get a feel for how they want to dress. Then, he hits various stores to match their personalities with what he finds on the racks. Often, it‟s a home run. “It‟s all about bringing a plethora of options. It‟s always good to have more than enough than not enough, especially with celebrities when it‟s your first time meeting them,” Christopher said. On Friday, he will style actress Robin Givens. She will host the Bill Cosby comedy show at the Alabama Theatre for two shows, 6 and 8:30 p.m. He‟ll also dress Givens for a post-comedy event at the Harbert Center with Ruben Studdard and the Ramsey Lewis Trio. He said he can‟t say what Givens will wear because he‟s still pulling selections. “I‟ve got boxes coming in from Los Angeles and New York. I‟m also pulling from Saks Fifth Avenue in Birmingham,” he said. “I‟m going to have boxes coming until Thursday. I still haven‟t received everything yet.” Givens is not the only celebrity he‟s encountered. During the 2011 Magic City Classic, which is the annual football showdown between Alabama A&M and Alabama State universities, he dressed actress LisaRaye McCoy. McCoy liked his looks so much from that weekend, that he now styles her, he said. She currently stars on VH1‟s “Single Ladies.” However, he does not style her character on the show. He said he got the Magic City Classic styling gig simply by his talent and a tweet. Last October, he asked if anyone knew how to get in touch with McCoy‟s manager because he was interested in styling her for the Classic. Someone he knew saw the tweet and gave him the information. McCoy‟s manager responded within 20 minutes. He was asked to put together some looks and email them. After a second round of emails, her manager told him, “I think you are onto something,” he recalled. After that, he said he was recruited to style McCoy, who was coming to Birmingham to be the Classic ambassador. Since McCoy loves white, Christopher did a lot of digging to find pieces in Birmingham. “I like challenges. That‟s what makes you great,” he said.

For McCoy‟s Friday night appearances before the game, he put her in a white pencil skirt from bebe, a white blazer from Urban Outfitters and a white Vince tank and a pair of glittery gold B Brian Atwood sandals from Saks Fifth Avenue at the Summit. In Saturday‟s parade, she wore a pair of gray B Brian Atwood over-the-knee boots, a gray sequined Alice + Olivia sweater, a pair of white leggings and a white turtleneck. For the game, McCoy wore a white, DKNY sweater from Belk at Summit and a pair of LisaRaye Collection jeans for PZI Jeans. Her shoes were by Christian Louboutin. And for a post-football party at B&A Warehouse, Christopher put McCoy in a Vince top from Saks Fifth Avenue, her own jeans and Gasoline Glamour shoes from Los Angeles.

He said he was only supposed to dress McCoy for the Saturday night party. But, he had pulled so much for her to consider, she had him dress her the whole weekend. She also ended up buying several pieces that she didn‟t wear that weekend but decided to take home. “It‟s always a wonderful feeling for a stylist to have a client look at your selections and say, „Oh, I like this enough that I want to keep it,‟” he said. Christopher‟s fashion sense is also getting noticed by singers. In December, he dressed Studdard for Studdard‟s new music video, “June 28 (I‟m Single),” which was shot in Atlanta. The song can be heard on airwaves now. Christopher said he wanted to give the newly divorced Studdard a youthful look with a message that he‟s single and ready to mingle. For one scene, he put Studdard in a black cardigan, a gray button-down shirt, black jeans, a red Gucci tie and an Atlanta Braves baseball cap. In another scene, he dressed Studdard in a black suit, black bow tie and a purple-printed pocket square. In another scene, he put him in a black vest, purple pinstriped shirt, purple Gucci tie, blue jeans and gray True Religion sneakers. “The vest with the tie was my favorite,” Christopher said. “Ruben liked them all. He kept everything from the video.” When Jennifer Williams, a personality from VH1‟s “Basketball Wives” came to Birmingham to host a party last summer, he dressed her as well. Christopher said that a lot of people think that if one lives in Birmingham, they can‟t do certain things or you have access to celebrities. “But, I‟m a living testimony that it can be done,” he said.

Fashion Stylist for Brothers Olson video “Give it All Away”

Testimonials "What a great experience it was working with Ryan. His creativity is endless, and he has no problem giving the model the shirt of his back if it gets the shot! The looks he pulled for us were exactly what we wanted and needed, but still showed his own personal style. We were lucky to find him." ~Vanessa Perez, Client Relations Manager, STYLEHOUSE Productions, Inc. 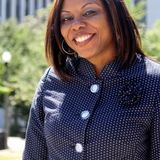