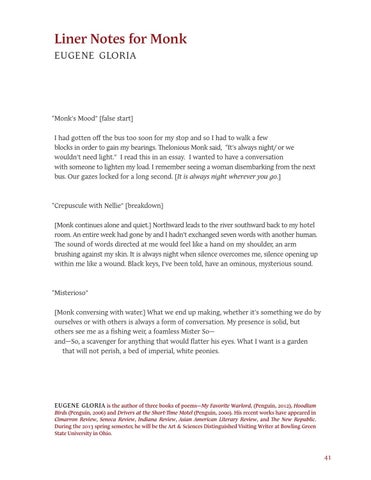 “Monk’s Mood” [false start] I had gotten oﬀ the bus too soon for my stop and so I had to walk a few blocks in order to gain my bearings. Thelonious Monk said, “It’s always night/ or we wouldn’t need light.” I read this in an essay. I wanted to have a conversation with someone to lighten my load. I remember seeing a woman disembarking from the next bus. our gazes locked for a long second. [It is always night wherever you go.]

“Crepuscule with Nellie” [breakdown] [Monk continues alone and quiet.] Northward leads to the river southward back to my hotel room. An entire week had gone by and I hadn’t exchanged seven words with another human. The sound of words directed at me would feel like a hand on my shoulder, an arm brushing against my skin. It is always night when silence overcomes me, silence opening up within me like a wound. Black keys, I’ve been told, have an ominous, mysterious sound.

“Misterioso” [Monk conversing with water.] What we end up making, whether it’s something we do by ourselves or with others is always a form of conversation. My presence is solid, but others see me as a ﬁshing weir, a foamless Mister So— and—So, a scavenger for anything that would ﬂatter his eyes. What I want is a garden that will not perish, a bed of imperial, white peonies.

EUGENE GLORIA is the author of three books of poems—My Favorite Warlord, (Penguin, 2012), Hoodlum Birds (Penguin, 2006) and Drivers at the Short-Time Motel (Penguin, 2000). His recent works have appeared in Cimarron Review, Seneca Review, Indiana Review, Asian American Literary Review, and The New Republic. During the 2013 spring semester, he will be the Art & Sciences Distinguished Visiting Writer at Bowling Green State University in Ohio. 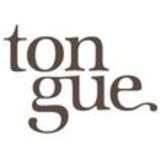 Tongue: A Journal of Writing & Art

Tongue is an assemblage of poetry, translations, and images that aspires to challenge comfortable gestures and distinctions.This is Issue Tw...

Tongue is an assemblage of poetry, translations, and images that aspires to challenge comfortable gestures and distinctions.This is Issue Tw...