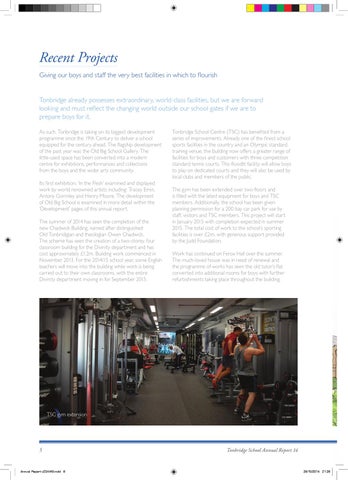 Recent Projects Giving our boys and staff the very best facilities in which to flourish Tonbridge already possesses extraordinary, world-class facilities, but we are forward looking and must reflect the changing world outside our school gates if we are to prepare boys for it. As such, Tonbridge is taking on its biggest development programme since the 19th Century to deliver a school equipped for the century ahead. The flagship development of the past year was the Old Big School Gallery. The little-used space has been converted into a modern centre for exhibitions, performances and collections from the boys and the wider arts community. Its first exhibition, ‘In the Flesh’ examined and displayed work by world renowned artists including: Tracey Emin, Antony Gormley and Henry Moore. The development of Old Big School is examined in more detail within the ‘Development’ pages of this annual report. The summer of 2014 has seen the completion of the new Chadwick Building, named after distinguished Old Tonbridigian and theologian Owen Chadwick. The scheme has seen the creation of a two-storey, four classroom building for the Divinity department and has cost approximately £1.2m. Building work commenced in November 2013. For the 2014/15 school year, some English teachers will move into the building while work is being carried out to their own classrooms, with the entire Divinity department moving in for September 2015.

Tonbridge School Centre (TSC) has benefited from a series of improvements. Already one of the finest school sports facilities in the country and an Olympic standard training venue, the building now offers a greater range of facilities for boys and customers with three competition standard tennis courts. This floodlit facility will allow boys to play on dedicated courts and they will also be used by local clubs and members of the public. The gym has been extended over two floors and is filled with the latest equipment for boys and TSC members. Additionally, the school has been given planning permission for a 200 bay car park for use by staff, visitors and TSC members. This project will start in January 2015 with completion expected in summer 2015. The total cost of work to the school’s sporting facilities is over £2m, with generous support provided by the Judd Foundation. Work has continued on Ferox Hall over the summer. The much-loved house was in need of renewal and the programme of works has seen the old tutor’s flat converted into additional rooms for boys with further refurbishments taking place throughout the building. 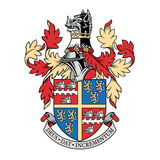 The Annual Report of Tonbridge School, including campus developments, a budget overview and giving report.

The Annual Report of Tonbridge School, including campus developments, a budget overview and giving report.