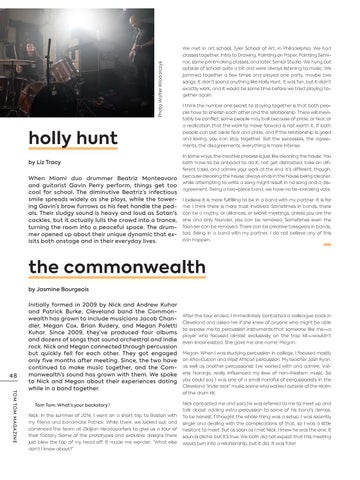 holly hunt by Liz Tracy When Miami duo drummer Beatriz Monteavaro and guitarist Gavin Perry perform, things get too cool for school. The diminutive Beatriz’s infectious smile spreads widely as she plays, while the towering Gavin’s brow furrows as his feet handle the pedals. Their sludgy sound is heavy and loud as Satan&#39;s cackles, but it actually lulls the crowd into a trance, turning the room into a peaceful space. The drummer opened up about their unique dynamic that exisits both onstage and in their everyday lives.

We met in art school, Tyler School of Art, in Philadelphia. We had classes together, Intro to Drawing, Painting on Paper, Painting Seminar, some printmaking classes, and later, Senior Studio. We hung out outside of school quite a bit and were always listening to music. We jammed together a few times and played one party, maybe two songs. It didn’t sound anything like Holly Hunt. It was fun, but it didn’t exactly work, and it would be some time before we tried playing together again. I think the number one secret to staying together is that both people have to cherish each other and the relationship. There will inevitably be conflict, some people may bail because of pride, or fear, or a realization that the work to move forward is not worth it. If both people can put aside fear and pride, and if the relationship is good and loving, you can stay together. But the successes, the agreements, the disagreements, everything is more intense. In some ways, the creative process is just like cleaning the house. You both have to be onboard to do it, not get distracted, take on different tasks, and admire your work at the end. It’s different, though, because cleaning the house always ends in the house being cleaner, while attempting to write a song might result in no song and a disagreement. Being a two-piece band, we have no tie-breaking vote. I believe it is more fulfilling to be in a band with my partner. It is for me. I think there is more trust involved. Sometimes in bands, there can be a mutiny, or alliances, or secret meetings. Unless you are the one and only founder, you can be removed. Sometimes even the founder can be removed. There can be creative takeovers in bands, too. Being in a band with my partner, I do not believe any of this can happen.

the commonwealth by Jasmine Bourgeois

Initially formed in 2009 by Nick and Andrew Kuhar and Patrick Burke, Cleveland band the Commonwealth has grown to include musicians Jacob Chandler, Megan Cox, Brian Rudery, and Megan Poletti Kuhar. Since 2009, they’ve produced four albums and dozens of songs that sound orchestral and indie rock. Nick and Megan connected through percussion but quickly fell for each other. They got engaged only five months after meeting. Since, the two have continued to make music together, and the Commonwealth’s sound has grown with them. We spoke to Nick and Megan about their experiences dating while in a band together. Tom Tom: What’s your backstory? Nick: In the summer of 2014, I went on a short trip to Boston with my friend and bandmate Patrick. While there, we lucked out and convinced the team at Zildjian Headquarters to give us a tour of their factory. Some of the prototypes and exclusive designs there just blew the top of my head off. It made me wonder, “What else don’t I know about?”

After the tour ended, I immediately contacted a colleague back in Cleveland and asked her if she knew of anyone who might be able to expose me to percussion instruments that someone like me—a player who focused almost exclusively on the trap kit—wouldn’t even know existed. She gave me one name: Megan. Megan: When I was studying percussion in college, I focused mostly on Afro-Cuban and West African percussion. My teacher Josh Ryan, as well as another percussionist I’ve worked with and admire, Valerie Naranjo, really influenced my love of non-Western music. So you could say I was one of a small handful of percussionists in the Cleveland “indie rock” music scene who worked outside of the realm of the drum kit. Nick contacted me and said he was referred to me to meet up and talk about adding extra percussion to some of his band’s demos. To be honest, I thought the whole thing was a setup. I was recently single and dealing with the complications of that, so I was a little hesitant to meet. But as soon as I met Nick, I knew he was the one. It sounds cliché, but it’s true. We both did not expect that this meeting would turn into a relationship, but it did. It was fate!

In this issue, Tom Tom offers accurate, unbiased, and non-fetishised accounts of sex and love by female musicians. The Sex and Love issue lets women describe and illustrate their own sensual journeys. We spoke with couples who make music together about creating and cohabiting with their romantic partners. We explored the experiences of Wax Idols's singer who is also a dominatrix and trans female experimental artist Sarah Hennies. We talked about what's in a name with Mannequin Pussy and Thunderpussy and included a sneak preview of a Spanish language, illustrated Consent Guide. There are even suggestions on how to foster self-love with yogi and former Avenue D singer Debbie Attias, a guide on the best sex toys for tour, and instructions for a meditative sound walk by environmental designer Mileece. 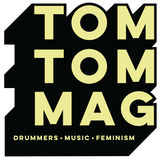 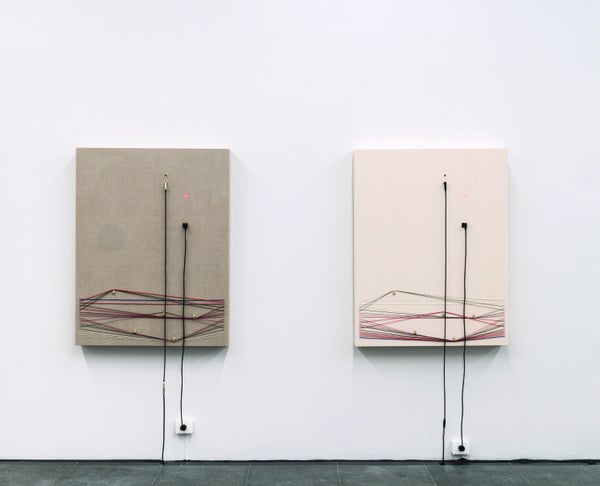 THE ART OF ROCK