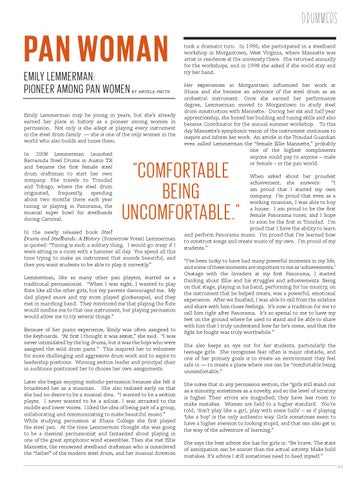 Emily Lemmerman may be young in years, but she’s already earned her place in history as a pioneer among women in percussion. Not only is she adept at playing every instrument in the steel drum family — she is one of the only women in the world who also builds and tunes them. In 2008 Lemmerman launched Barracuda Steel Drums in Austin TX and became the first female steel drum craftsman to start her own company. She travels to Trinidad and Tobago, where the steel drum originated, frequently, spending about two months there each year tuning or playing in Panorama, the musical super bowl for steelbands during Carnival.

took a dramatic turn. In 1996, she participated in a steelband workshop in Morgantown, West Virginia, where Mannette was artist in residence at the university there. She returned annually for the workshops, and in 1998 she asked if she could stay and try her hand. Her experiences in Morgantown influenced her work at Ithaca and she became an advocate of the steel drum as an orchestral instrument. Once she earned her performance degree, Lemmerman moved to Morgantown to study steel drum construction with Mannette. During her six and half year apprenticeship, she honed her building and tuning skills and also became Coordinator for the annual summer workshop. To this day Mannette’s symphonic vision of the instrument continues to inspire and inform her work. An article in the Trinidad Guardian even called Lemmerman the “female Ellie Mannette,” probably one of the highest compliments anyone could pay to anyone – male or female – in the pan world.

In the newly released book Steel Drums and Steelbands: A History (Scarecrow Press) Lemmerman is quoted: “Tuning is such a solitary thing. I would go crazy if I were sitting in a room with a hammer all day. You spend all this time trying to make an instrument that sounds beautiful, and then you want students to be able to play it correctly.” Lemmerman, like so many other pan players, started as a traditional percussionist. “When I was eight, I wanted to play flute like all the other girls, but my parents discouraged me. My dad played snare and my mom played glockenspiel, and they met in marching band. They convinced me that playing the flute would confine me to that one instrument, but playing percussion would allow me to try several things.” Because of her piano experience, Emily was often assigned to the keyboards. “At first I thought it was sexist,” she said. “I was never intimidated by the big drums, but it was the boys who were assigned the wild drum parts.” This inspired her to volunteer for more challenging and aggressive drum work and to aspire to leadership positions. Winning section leader and principal chair in auditions positioned her to choose her own assignments. Later she began enjoying melodic percussion because she felt it broadened her as a musician. She also realized early on that she had no desire to be a musical diva. “I wanted to be a section player. I never wanted to be a soloist. I was attracted to the middle and lower voices. I liked the idea of being part of a group, collaborating and communicating to make beautiful music.” While studying percussion at Ithaca College she first played the steel pan. At the time Lemmerman thought she was going to be a classical percussionist and fantasized about playing in one of the great symphonic wind ensembles. Then she met Ellie Mannette, the renowned steelband craftsman who is considered the “father” of the modern steel drum, and her musical direction

When asked about her proudest achievement, she answers: “I am proud that I started my own company. I’m proud that even as a working musician, I was able to buy a house. I am proud to be the first female Panorama tuner, and I hope to soon be the first in Trinidad. I’m proud that I have the ability to learn and perform Panorama music. I’m proud that I’ve learned how to construct songs and create music of my own. I’m proud of my students.” “I’ve been lucky to have had many powerful moments in my life, and some of these moments are important to me as ‘achievements.’ Onstage with the Invaders at my first Panorama, I started thinking about Ellie and his struggles and achievements. Being on that stage, playing in his band, performing for his country, on the instrument that he helped create, was a powerful, emotional experience. After we finished, I was able to call from the sideline and share with him those feelings. It’s now a tradition for me to call him right after Panorama. It’s so special to me to have my feet on the ground where he used to stand and be able to share with him that I truly understand how far he’s come, and that the fight he fought was truly worthwhile.” She also keeps an eye out for her students, particularly the teenage girls. She recognizes fear often is major obstacle, and one of her primary goals is to create an environment they feel safe in — to create a place where one can be “comfortable being uncomfortable.”

She notes that in any percussion section, the “girls still stand out as a minority, sometimes as a novelty, and so the level of scrutiny is higher. Their errors are magnified; they have less room to make mistakes. Women are held to a higher standard. You’re told, ‘don’t play like a girl, play with some balls’ – as if playing ‘like a boy’ is the only authentic way. Girls sometimes seem to have a higher aversion to looking stupid, and that can also get in the way of the adventure of learning.” She says the best advice she has for girls is: “Be brave. The state of anticipation can be scarier than the actual activity. Make bold mistakes. It’s advice I still sometimes need to heed myself.” 41