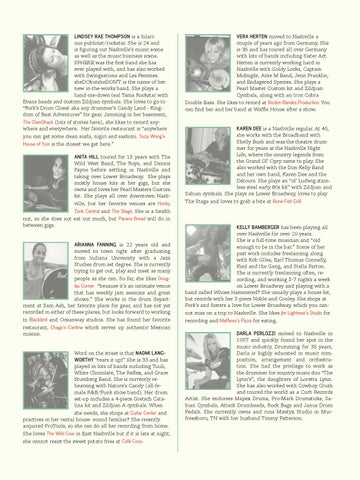 LINDSEY RAE THOMPSON is a hilarious publicist/rockstar. She is 24 and is figuring out Nashville’s music scene as well as the music business scene. SPHERE was the first band she has ever played with, and has also worked with Swingsations and Les Femmes. sheDObutsheDON’T is the name of her new in-the-works band. She plays a hand-me-down teal Tama Rockstar with Evans heads and custom Zildjian cymbals. She loves to go to “Fork’s Drum Closet aka any drummer’s Candy Land - Kingdom of Beat Adventures” for gear. Jamming in her basement, The ClamShack (lots of stories here), she likes to record anywhere and everywhere. Her favorite restaurant is “anywhere you can get some clean sushi, nigiri and sashimi. Suzy Wong’s House of Yum is the closest we get here.” ANITA HILL toured for 15 years with The Wild West Band, The Roys, and Dennis Payne before settling in Nashville and taking over Lower Broadway. She plays mostly house kits at her gigs, but she owns and loves her Pearl Masters Custom kit. She plays all over downtown Nashville, but her favorite venues are Honky Tonk Central and The Stage. She is a health nut, so she does not eat out much, but Panera Bread will do in between gigs. ARIANNA FANNING is 22 years old and moved to town right after graduating from Indiana University with a Jazz Studies drum set degree. She is currently trying to get out, play and meet as many people as she can. So far, she likes Douglas Corner “because it’s an intimate venue that has weekly jam sessions and great shows.” She works in the drum department at Sam Ash, her favorite place for gear, and has not yet recorded in either of these places, but looks forward to working in Blackbird and Oceanway studios. She has found her favorite restaurant, Chago’s Cantina which serves up authentic Mexican cuisine. Word on the street is that NAOMI LANGWORTHY “tears it up!” She is 33 and has played in lots of bands including Tuuli, White Chocolate, The Reflex, and Grace Stumberg Band. She is currently rehearsing with Nature’s Candy (all-female R&B/Funk show band). Her drum set-up includes a 4-piece Gretsch Catalina kit and Zildjian A cymbals. When she needs, she shops at Guitar Center and practices in her rental house- sound familiar? She recently acquired ProTools, so she can do all her recording from home. She loves The Wild Cow in East Nashville but if it is late at night, she cannot resist the sweet potato fries at Café Coco.

VERA HERTEN moved to Nashville a couple of years ago from Germany. She is 36 and has toured all over Germany with lots of bands including Sister Act. Herten is currently working hard in Nashville with Goldy Locks, Captain Midnight, Ante M Band, Jenn Franklin, and Endagered Species. She plays a Pearl Master Custom kit and Zildjian Cymbals, along with an Iron Cobra Double Bass. She likes to record at Rockin Randes Production. You can find her and her band at Waffle House after a show. KAREN DEE is a Nashville regular. At 46, she works with the Broadband with Shelly Bush and was the theatre drummer for years at the Nashville Night Life, where the country legends from the Grand Ol’ Opry came to play. She also worked with the Don Kelly Band and her own band, Karen Dee and the Detours. She plays an “ol’ Ludwig stainless steel early 80s kit” with Zildjian and Sabian cymbals. She plays on Lower Broadway, loves to play The Stage and loves to grab a bite at Bone Fish Grill.

KELLY BAMBERGER has been playing all over Nashville for over 20 years. She is a full-time musician and “old enough to be in the bar.” Some of her past work includes freelancing along with Rob GIles, Earl Thomas Connelly, Kool and the Gang, and Stella Parton. She is currently freelancing often, recording, and working 5-7 nights a week on Lower Broadway and playing with a band called Whose Hammered? She usually plays a house kit, but records with her 5-piece Noble and Cooley. She shops at Fork’s and fosters a love for Lower Broadway, which you cannot miss on a trip to Nashville. She likes Jim Lightman’s Studio for recording and Maffioso’s Pizza for eating. DARLA PERLOZZI moved to Nashville in 1997 and quickly found her spot in the music industry. Drumming for 35 years, Darla is highly educated in music composition, arrangement and orchestration. She had the privilege to work as the drummer for country music duo “The Lynn’s”, the daughters of Loretta Lynn. She has also worked with Cowboy Crush and toured the world as a Curb Records Artist. She endorses Mapex Drums, Pro-Mark Drumsticks, Sabian Cymbals, Attack Drumheads, Rock Bags and Janus Drum Pedals. She currently owns and runs Misstyx Studio in Murfreesboro, TN with her husband Timmy Patterson.

Singing while drumming is an impressive feat not many can pull off. This issue of Tom Tom Magazine highlights some of the legends who make i...

Singing while drumming is an impressive feat not many can pull off. This issue of Tom Tom Magazine highlights some of the legends who make i...