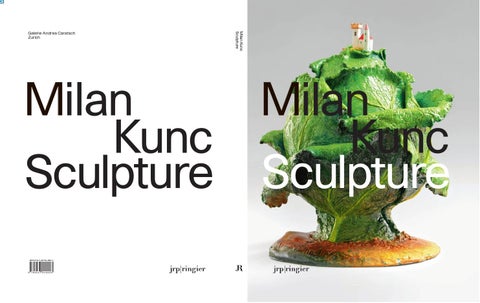 ETERNAL ARCADIA Yves Aupetitallot By way of a caveat to these few lines there really is a kind of methodological obviousness in briefly recalling that Milan Kunc was born in Czechoslovakia in 1944 and left that country in 1969 to take up residence in Dusseldorf and study at the Kunstakademie there. From the outset that obviousness presupposes that biographical facts, elsewhere of no particular interest, might here be decisive with regard to the constitution of a body of work and how to understand it. Milan Kunc was in fact trained during the Soviet era and took part in the Prague Spring uprising of 1968 before moving to the nonCommunist West and living through the societal upheavals that shook it. At the end of the 1960s he had direct experience of two systems of viewing the world, each claiming to work toward the building of a social utopia whose foundations were nurtured by a dialectic opposition to the basis of the other system. In his journey through that double political and social geography, looking beyond a differentiated ideological framework and ultimate destination, he noted the same recourse to the universal language of kitsch. The proletariat of the whole world had apparently become consumers of the whole world. They seemed to aspire to one and the same consumerist paradise whose finery and the representation of the happiness it exhibits are depicted with the help of a stylized, kitsch, or pop iconographic repertory. He produced his first known works in 1968. In them he combines objects and images borrowed from the symbolics and imagery of Communismâ&#x20AC;&#x201C;the red flag, the sickle, and the hammer. The latter two are cut out of cardboard and covered with a painted military camouflage motif. The red flag is presented with a dress hanging on a coat stand with a womanâ&#x20AC;&#x2122;s face above it, drawn in the manner of a strip cartoon. The date written on the picture, August 21, 1968, is the day that Warsaw Pact troops entered Prague. Since then Kuncâ&#x20AC;&#x2122;s work has primarily been as a painter, including when he makes ceramics, which he has been producing regularly in series since the 1970s. His painting is figurative, with an ostentatiously

smooth technique, since the early 1980s in particular. His subjects are constructed using a collection of images of various provenances that mainly fall into three categories: the icons of Western consumerist culture like Coca-Cola or McDonald’s, Socialist Realism with its symbolics representing its ideology and asceticism, and the masterpieces of classical painting. He combines them with modernist procedures coming from photomontage, photocollage, and collage. At the end of the 1970s, the preparatory phase of his work involved photographing still lifes that he himself had arranged. The combination of his elements produces new icons and new meanings, and he claims their relatedness to Surrealism: “It was my Surrealist method. I wanted to paint a hallucinatory content in a controlled way: precisely and illusionistically, as if what was depicted really existed.”* Each of his combined images emphasizes its narrative potential to excess and veers clearly toward parody and controlled naive art. The 1978 Batman now held in Darmstadt shows the hero in flight, brandishing the hammer and sickle. The eminent art critic, Wolfgang Max Faust, to whom Kunc had shown his work, apparently exclaimed “But it’s naive,” a remark Kunc makes this comment on: “But that was very school-teacherish, very naive on his part. He should have seen that it had to do with a high-grade form of realism. Nobody can deny that it was simply well done.”* This naive style and free approach to form vested in a certain type of parody, or even caricature, are marked by the influence of Josef Lada, a Czech writer and graphic artist who had illustrated Jaroslav Hasek’s The Good Soldier Švejk, and been the author of several hundred satirical drawings describing Czech society prior to World War I in a ferocious manner. Trash, parody, kitsch, realism, and many other things would all be grounds for the relative wariness of him evinced by the avant-garde milieus of the 1970s. Hadn’t Richter, who taught him at the Düsseldorf Kunstakademie, advised him to work for an advertising agency? He himself was clearly wary of an avant-garde whose jargon was obviously indebted to revolutionary Marxist thinking: “The Western avant-garde is just as dogmatic in its way as Socialist Realism

in the East. There they take a poor view of abstraction, and here my work is misunderstood. Thus we see how art is a victim of idiocy.” Critical debate has changed, and to a large extent it has today become obsolete. It is now conceivable to look at the work of Milan Kunc in a different light, his ceramic pieces in particular. At the beginning of this text we noted their similarities to the artist’s painting. Matisse and Picasso, whom he has often misappropriated and parodied, produced painter’s sculptures, as did other artists of the same generation–Walter Dahn for example. The chronology in which they appear and the subjects developed coincide with those of the paintings of the time in question. In 1976 Kunc produced some 100 pieces, all of women’s shoes. The form is respected, but is constructed from a combination of borrowings of forms and subjects/objects which recur in pictures that are contemporary with them. Since that time he has constantly produced ceramics that stand out for their forms and palette of colors. They are served by a smooth, reflective surface, just like his paintings. The ceramic piece entitled Eternal Arcadian Living describes a suburban landscape of lodgings that are encapsulated in a bone. The picture Recycled World from the same period repeats almost the same symbols to convey criticism of a finally happy global society in which consumerism has now seemingly triumphed to offer us unlimited happiness, without any kind of constraint.

* The quotations are taken from the catalogue of the Milan Kunc exhibition, Düsseldorf Kunstverein, April 6—May 27, 1984

ACKNOWLEDGEMENTS The book wouldn’t have existed without the invaluable help of Gaby Schauer and Stephen Leuenberger.

© 2009, the author, the artist, the photographer, Galerie Andrea Caratsch, and JRP|Ringier Kunstverlag AG Printed in Europe.