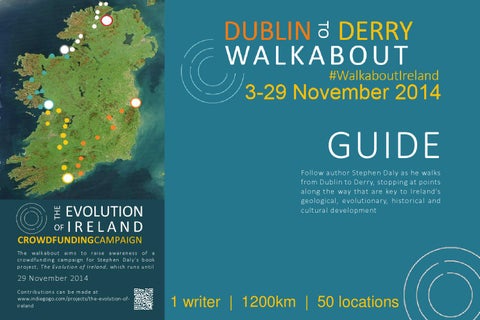 GUIDE Follow author Stephen Daly as he walks from Dublin to Derry, stopping at points along the way that are key to Irelandâ&amp;#x20AC;&amp;#x2122;s geological, evolutionary, historical and cultural development

CROWDFUNDINGCAMPAIGN The walkabout aims to raise awar eness of a crowdfunding campaign for Stephen Dalyâ&amp;#x20AC;&amp;#x2122;s book project, Th e Evolution of Ireland , which runs until

29 November 2014 Contributions can be made at www.indiegogo.com/projects/the-evolution-ofireland

How was Ireland created?

Have you ever wondered?

What animals have lived on the island?

How did our language and culture develop?

How does Irish history and pre-history fit into the global picture?

will be discussing as he walks from Dublin to Derry, on a route that includes many of the most significant sites concerning Ireland’s past and development. They all relate to his current book project

The Evolution of Ireland , which searches for the answers to 2 simple questions:

What is Ireland? &amp;

Who are the Irish?

The Book The book, to be written in two parts, aims to construct a complete story of Ireland’s development that goes far beyond the usual focus on recent centuries, allowing us to connect the island’s ancient past with the present day. By drawing on the latest discoveries in geology, the fossil record and human genetics, as well linguistic, archaeological and historical research, the book explains how Ireland was created from two separate halves, the evolution of its plants and animals, the emergence of a distinct Irish culture, language, and history, and the impact of the Irish worldwide.

The Route The walkabout begins at

November at Kilmainham Gaol and Stephen will visit almost 50 different locations along a route of over 1,200 kilometres before completing the walk on Saturday 29 November. Each stopping point has been carefully chosen and Stephen will be meeting with local historical, geological and cultural bodies to discuss the remarkable story of Ireland’s development. The walk will take

4 weeks , and will involve 4 stages

Main Sites on the Route

The Starting Point With its pivotal place in modern Irish history, Kilmainham Gaol is a suitable starting point for the journey. The gaol has housed everyone from United Irishman after the 1798 rebellion, to Fenians, Charles Stewart Parnell and the leaders of the 1916 Rising.

In the 14th century (from 1361 to 1374), Carlow town was the capital of the Lordship of Ireland. The area around the town has been inhabited for thousands of years, with the Brownshill Dolmen having been built by some of the earliest farmers in Ireland, sometime between 4000 BC and 3000 BC.

Was once an important border settlement of “the Pale”, reflected by the fact that Parliament sat here in 1389. One of the earliest engagements of the 1798 rebellion took place here, and the town itself was actually a part of County Dublin until as recently as 1836.

| Co. Kilkenny Kilkenny Cityâ&amp;#x20AC;&amp;#x2122;s past is still very much alive in its present, with impressive castles, cathedrals and abbeys seemingly around every corner. From beginnings as a monastic settlement in the sixth century, it grew in importance as a Norman merchant town, and after the 1641 rebellion it served as the seat of Irish self-government from 1642 to 1649 until this was put to an end by the invasion of Oliver Cromwell.

During the early middle ages, Cashel was the capital of the kings of Munster, and many ruins can still be found on the Rock of Cashel which looks down over the town. Saint Patrick is said to have baptised Cashelâ&amp;#x20AC;&amp;#x2122;s King Aengus here in the fifth century, while one of the main events in the ascent of Brian Boru was his crowning as king of Cashel here in 977.

Birthplace and childhood home of Eliza Lynch, who became the unofficial first lady of Paraguay in the 1860s/1870s. Roger Boyle, a one-time supporter of Oliver Cromwell, founded the town in 1661 and named it Charleville (‘Charles Town’) in an effort to appease King Charles II after the restoration of the monarchy the previous year.

Lough Gur and its environs have been inhabited since around 3000 BC, and there is evidence of settlement from many different time periods, including Ireland’s largest stone circle, a dolmen, the remains of stone age houses, medieval crannógs, ringforts, and the ruins of a Norman castle.

| Co. Clare The limestone of the Burren was formed around 350 million years ago from the compacted remains of countless marine creatures when Ireland was the bed of a shallow sea. It has a very unique flora and fauna and some remarkable man-made features such as the iconic Poulnabrone Dolmen, which may be over 6,000 years old.

Killaloe is the birthplace of Brian Boru and served as his main seat of power when he controlled most of the island in the eleventh century as High King. From Killaloe he could also keep an eye on the town of the Vikings to the south, which they called Hlymrekr and which we now call Limerick.

Co. Mayo The name of this hilly region extending from north Galway to southern Mayo derives from a Norman family from Wales who settled in the area in the thirteenth century. Undoubtedly the most famous bearer of this family name was that giant of twentieth century literature, James Joyce.

This sprawling region of great natural beauty is home to many native Irish speakers, and the headquarters of Raidió na Gaeltachta and TG4 are quite close together, in Casla and Baile na hAbhann, respectively, in the southern part of Connemara about 30-40 km west of Galway City.

The one and only James Joyce

| Co. Galway Mount Gable, which lies two kilometres west of the town, is the site of a great battle in Irish mythology – the Second Battle of Moytura. Here, the Tuatha Dé Danann vanquished the Fomorians, led by Balor of the Evil Eye, and secured their mastery of Ireland.

Castle Achill One of Granuaile’s strongholds

Home of the infamous sixteenth century pirate queen Granuaile (Grace O’ Malley), chiftain of the Ó Máille clan which ruled Westport and the surrounding lands. Croagh Patrick, which draws pilgrims from across Ireland every year, lies around 10 kilometres west of the town.

Another mythological hero in battle: the mighty Cú Chulainn

This is a very important area for geologists as the coastline in this area is rich in fossils.

To the north of the town is Killala Bay, where the French sailed down to land at Killala during the 1798 rebellion. The leader of the french force was one General Humbert and a monument called the Humbert Monument was unveiled by Maud Gonne in 1898. The monument still stands in the town today, albeit in a different location.

Admiral William Brown, hailed as the father of the Argentine navy and a national hero in Argentina, was born here. He left Ireland when he was nine when his family emigrated to Philadelphia.

This area has been inhabited since the Mesolithic, over 6,000 years ago. Great structures from the Neolithic and Bronze ages can also be found in, or close to, the town. It is also may be the site of a settlement marked on the map of the world drawn up by the Greco-Egyptian geographer Claudius Ptolemy in the second century AD.

Carrowmore megalithic cemetery | Co. Sligo One of the greatest complexes of megalithic tombs in Ireland, with 30 monuments still standing at the site. The passage tombs here are older than Newgrange and may represent an early stage in this megalithic tomb tradition which would reach the height of its sophistication in the Boyne Valley.

Like the Burren, Ben Bulben is composed of limestones that formed in a shallow sea which covered most of Ireland around 350 million years ago. Originally a plateau, it was carved into its present shape by the abrasive force of great ice sheets during the last ice age. In Irish mythology, it is an important hunting ground for Fionn and the Fianna and also the final resting place of Diarmuid and GrĂĄinne.

The name of the town in Irish is Ráth Bhoth, with ráth meaning ‘fort’ and both meaning ‘hut’, thought to derive from the clay and wattle huts of early Christian monks, which were surrounded by a fortified enclosure. Saint Colmcille is said to have established a monastic settlement here in the mid sixth century. There is also evidence of much more ancient settlements in the area.

This was the capital of the ancient kingdom of Tír Chonaill, ruled by the O’ Donnells, up until the early seventeenth century. Their most famous son, Red Hugh O’Donnell, was one of the last great Gaelic chieftains.

Ballyshannon and the surrounding area has a long history of settlement, stretching back to the time of the earliest farmers in the Neolithic. Bronze Age fulachta fiadh, or ‘burnt mounds’, and a possible trackway of similar age are found here, while recently a previously unknown church and cemetery from the late middle ages was discovered. The locals claim that Ballyshannon is the oldest town in Ireland and it is also the birthplace of the guitar legend Rory Gallagher.

View from the stone ringfort

The northernmost point in Ireland, it faces Inishtrahull island, which is the most ancient place in Ireland, with outcropping rocks dating to almost 1.8 billion years ago, when the earliest pieces of Ireland first emerged into the world.

Waves crashing on the rocky shore at Malin Head

The site of an early Christian monastery dating to the sixth century. The monastery and village were sacked by vikings in the tenth and thirteenth centuries.

The Grianan of Aileach comprises a number of historic structures situated on a hilltop. In Gaelic times, this was one of the great royal sites in Ireland and there is an impressive stone ringfort still standing which is thought to have been built by the UĂ­ NĂŠill in the seventh century or earlier. Fahan creek

your name your location your area of interest (e.g. history, geology) whether you represent a group

An online is currently running for Part One of the book, which allows people to invest in the book project in return for different rewards, including previews of chapters and hard copies of the book. It runs until

If the book idea appeals to you, help make it a reality. You can contribute

contributions is through the link provided opposite, but can also be made by postal order to Stephen Daly | 67 Hybreasal House | South Circular Road | Dublin 8 Please also help to spread the word.

To Find out More

29 November. as little or as much as you want. The

To get a book summary &amp; sneak preview www.theevolutionofireland.com

About the Author I am a first time author with a background in history and archaeology, and have previously worked as an archaeologist on a number of projects in Ireland.

I would be happy to get your feedback and would like to thank everyone who contributes to the project.

In 2009 I began work on The Evolution of Ireland, which is inspired by my lifelong interest in all aspects of the past, including the history of biological evolution and, in particular, human evolution.

Feel free to e-mail me at stephendaly@theevolutionofireland.com

Follow writer Stephen Daly as he walks from Dublin to Derry from 3-29 November, to raise awareness of the crowdfunding campaign for his book project, The Evolution of Ireland Contributions can be made at the following link until 29 November 2014: https://www.indiegogo.com/projects/the-evolution-of-ireland#home 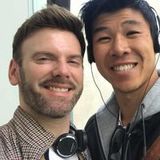