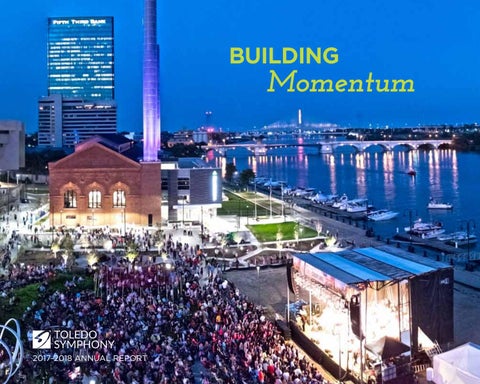 FROM THE PRESIDENT &amp; CEO From the opening chords of Beethoven’s Eroica in September 2017 to the fabulous Indigo Girls performance in June 2018, the 2017-2018 season was full of momentum and vigor. We built on earlier successes, forged innovative collaborations, grew our audiences, sold out more concerts, and welcomed new supporters! We performed at Downtown’s renovated Promenade Park, welcoming over 22,000 fans over three concerts. We enjoyed a special evening with Crystal Bowersox in July 2017, welcomed crooner Steve Tyrell in August 2017, and celebrated the Music of Prince (featured on the front cover) in September 2017 as part of the Momentum Festival. Through these concerts and with these crowds, the Toledo Symphony was part of a special moment in the city’s renaissance. We broke new ground with innovative programming like the North Star Festival, for which the TSO received its first grant from the National Endowment for the Arts in years. We explored eight of Mozart’s favorite piano concertos in the Festival of 88. We also looked to the future by presenting the world premieres of two concertos: Lowell Liebermann’s Cello Concerto and Alice Gomez’s Latin Jazz Suite for Trumpet and Orchestra. These works symbolized a renewed commitment to commissioning new works for the orchestral repertoire. We launched Toledo SymphonyLab™, a weekly radio program and podcast. This new partnership with WGTE Public Media provides a lighthearted view into the Toledo Symphony, including interviews with musicians, composer profiles, and concert highlights. This is an important tool for speaking directly with our audience and carrying on a dialogue about that which we hold dear. We welcomed Broadway royalty Audra McDonald and Leslie Odom, Jr. We enjoyed an intimate evening with the legendary soprano Kathleen Battle, swayed to some of Duke Ellington’s classical compositions, and loaded up the Peristyle with a space-tacular pairing of The

Planets and Also sprach Zarathustra. We previewed Alain Trudel’s artistic leadership and bid adieu to our beloved Resident Conductor, Sara Jobin. We saw strong growth in education. Our three Toledo Symphony Youth Orchestras received a record number of applications for a limited number of spaces. We inaugurated the Toledo Symphony Youth Quartet, comprised of talented string musicians from the Youth Orchestras. We kicked-off a series of summer classes through the Toledo Symphony School of Music, welcoming students from 3 to 83 in several areas of study. We also introduced the popular TSO College Pass, which gave area college students admission to TSO concerts for a low, flat fee. The orchestra received wonderful support from the community in the 2017-2018 season, as contributed income grew 14%. On Giving Tuesday, we recorded one of our largest gifts ever, when an anonymous donor pledged $1 million to the orchestra. We initiated a new partnership with Buckeye Broadband, which allowed us to rollout our popular TSO in HD technology at all Peristyle performances. We welcomed ProMedica as the first-ever Classics Series title sponsor, marking the first time that all TSO series received corporate underwriting. We also began a special marketing partnership with Toledo Ballet and helped them achieve one of their strongest Nutcracker seasons in history. It was a busy year at the Toledo Symphony, but one full of strategic vision, strong programming, and incredible momentum. Together, we are spreading the joy of music across our beautiful region and making strong artistic contributions to the communities that we serve. Without our dedicated team of musicians, staff—and you—our patrons and donors, this success would not be possible. Thank you for being a part of it. Thank you,

season highlights Music of Prince September 15, 2017 Promenade Park The Toledo Symphony inaugurated the ProMedica Summer Concert Series at the newly renovated Promenade Park in downtown Toledo during the summer of 2017. In September, the TSO kicked off Momentum – Hot Glass | Cool Music, a threeday festival of music and art in downtown Toledo, with A Symphonic Tribute to the Music of Prince, bringing in nearly 12,000 people down to the waterfront along the Maumee River. Mozart Piano Concerto Nos. 6 &amp; 21 October 7, 2017 | Lourdes University Franciscan Center New Music Director Designate Alain Trudel led the first concert on the Mozart &amp; More Series: Festival of 88, featuring one of Mozart’s most popular concerti paired with a TSO premiere. Pianist Frances Renzi performed both Piano Concerto No. 6 and 21 on this first concert of the new afternoon format. An Evening with Leslie Odom, Jr. October 21, 2017 Stranahan Theater Hamilton star and winner of the 2016 Best Actor Tony Award, Leslie Odom, Jr. performed at the Stranahan Theater. The show featured old standards, a tribute to Nat King Cole, and several jazz and Broadway hits, including music from Hamilton. Liebermann Premiere October 27 &amp; 28, 2017 Toledo Museum of Art Peristyle Cellist Julian Schwarz performed the world premiere of Lowell Liebermann’s Cello Concerto, newly commissioned for the Toledo Symphony. This was the first of two world premieres

during the season, showing a renewed commitment to performing new works in the orchestral genre.

An Evening with Leslie Odom, Jr.

Mash-ups and Samples… Music and Recycling November 2, 2017 Toledo Museum of Art Peristyle Owens-Illinois partnered with the Toledo Symphony to present a Young People’s Concert that offered new twists on old tunes. Special guests included Riley, the recycling puppet, and Glass City Steel from Toledo School from the Arts. A TSO in HD screen also allowed students to better see the musicians and allowed everyone to view a special video about recycling during the performance. Audra McDonald November 4, 2017 Toledo Museum of Art Peristyle Named one of Time magazine’s 100 most influential people of 2015, six-time Tony Awardwinning Broadway icon Audra McDonald joined the TSO for a special, sold-out evening of Broadway favorites. This was the first of three Spotlight Events of the season. Toledo Ballet’s Nutcracker December 9 &amp; 10, 2017 Stranahan Theater The Toledo Symphony marketing and box office promoted and sold tickets for Toledo Ballet’s annual Nutcracker, increasing attendance by 21% and revenue by 25% compared to the previous season.

MILLION DOLLAR PLEDGE HIGHLIGHTS “GIVING TUESDAY” In late November of 2017, the orchestra received word of a $1 million pledge from an anonymous donor. The gift was to come to the TSO in two phases, $500,000 during the 2017-2018 season and an additional $500,000 during the 2018-2019 season, the orchestra’s 75th anniversary. This was one of the largest operating gifts ever made to the orchestra. The first $500,000 gift provided direct support to the orchestra’s operating budget in 2017-2018, sustaining the Toledo Symphony’s high level of artistic excellence. The second $500,000 gift will serve as a matching grant during the orchestra’s 75th Anniversary season in 2018-2019, providing a dollar-for-dollar match for any new donations secured during the season. These funds will match donations from new and lapsed donors as well as increased donations from existing donors and corporate supporters. This generous matching grant will inspire and motivate other donors to increase their support for the premier performing arts organization in Northwest Ohio.

North Star Festivalh February - March 2018 Various Toledo Lucas County Library locations The TSO visited various library branches, leading up to an open rehearsal and Chamber concert at the Toledo Lucas County Public Library Main Library as part of the North Star Festival, a partnership with Toledo Lucas County Public Library and Lathrop House. Lift Ev’ry Voice: The Musical and Historical Legacy of the Underground Railroadh February 15, 2018 Toledo Museum of Art Peristyle The Toledo Symphony Orchestra along with community organizations came together to present a Young People’s Concert highlighting Toledo’s Underground Railroad history through music. Special friends from the Lathrop House were on hand to narrate and make history come to life for the area students and teachers in attendance. The concert featured Unspoken by Henry Cole and a sing-along of Lift Ev’ry Voice and Sing.

FROM THE CHAIRMAN It is my privilege to serve as Board Chair of the Toledo Symphony Board of Trustees during this exciting time in the history of the organization. With new leadership in place—including Music Director Designate Alain Trudel, President &amp; CEO Zak Vassar, and key positions in the administrative staff and musician core—the Toledo Symphony continues to pick up steam and momentum in new and unprecedented ways, pushing the organization to new limits and beyond. We have much to celebrate as we look back on the important work your support made possible during the 2017-2018 season. During the year, we enhanced the audience experience with TSO in HD screens at all of our flagship Classics Series concerts, providing a totally immersive experience for everyone in attendance. We saw nearly a 9% increase in single tickets sold for Classics performances and an incredible 35% increase in corresponding single ticket revenue compared to the previous season, thanks to excellent artistic programming. The series was full of exciting moments, including Alain Trudel’s first concerts as Music Director Designate, world premieres of Lowell Liebermann’s Cello Concerto and Alice Gomez’s Latin Jazz Suite for Trumpet and Orchestra, and Gustav Holst’s The Planets, which resulted in sold out crowds to the Peristyle in early February. The season was also full of community collaborations. In September, the Toledo Symphony helped inaugurate the new Promenade Park and ProMedica Summer Concert Series with Crystal Bowersox &amp; Caly Bevier, Steve Tyrell, and A Symphonic Tribute to the Music of Prince, bringing over 20,000 people downtown to the waterfront to enjoy music and experience the excitement of the rejuvenated Downtown Toledo. In December, the Toledo Symphony worked with Toledo Ballet to promote The Nutcracker, increasing attendance by 21% and ticket revenue by 25%

compared to the previous year. And, in the spring, the Toledo Symphony launched its first-ever North Star Festival, inspired by Toledo’s heritage as a safe haven along the Underground Railroad during times of slavery. There are simply too many great moments to mention here, but what remains clear to me is that these moments add up over time, generating great excitement for the future. The community has taken notice, as evidenced by the $1 million dollar donation on Giving Tuesday from a generous donor and numerous gifts throughout the season from individuals like you. On behalf of the Board of Trustees, thank you for your unwavering support which allows us to reach and achieve our mission. Without your generosity, the inspiring programs we create would not be possible. Let’s keep this momentum going because we’re just getting started. Exciting times are ahead! Warm regards,

This is a snapshot of the annual budget of the Toledo Orchestra Association, Inc. (DBA Toledo Symphony Orchestra). For a balance sheet and additional information, please contact Randi Dier (rdier@toledosymphony.com; 419-418-0035) or view our financial report on Guidestar.org. Copies of the 2018 Report of the Auditors available on request. For a listing of donors, please see the Listen concert program.