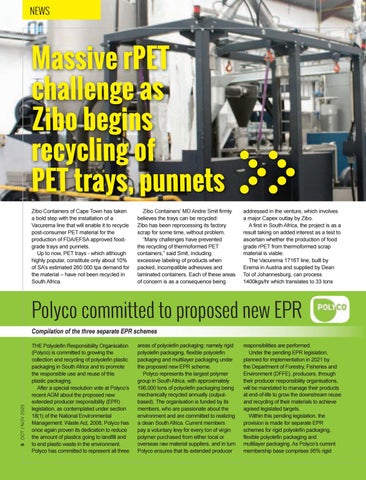 Massive rPET challenge as Zibo begins recycling of PET trays, punnets Zibo Containers of Cape Town has taken a bold step with the installation of a Vacurema line that will enable it to recycle post-consumer PET material for the production of FDA/EFSA approved foodgrade trays and punnets. Up to now, PET trays - which although highly popular, constitute only about 10% of SA’s estimated 260 000 tpa demand for the material – have not been recycled in South Africa.

Zibo Containers’ MD Andre Smit firmly believes the trays can be recycled: Zibo has been reprocessing its factory scrap for some time, without problem. “Many challenges have prevented the recycling of thermoformed PET containers,” said Smit, including excessive labeling of products when packed, incompatible adhesives and laminated containers. Each of these areas of concern is as a consequence being

addressed in the venture, which involves a major Capex outlay by Zibo. A first in South Africa, the project is as a result taking on added interest as a test to ascertain whether the production of food grade rPET from thermoformed scrap material is viable. The Vacurema 1716T line, built by Erema in Austria and supplied by Dean Toi of Johannesburg, can process 1400kgs/hr which translates to 33 tons

Compilation of the three separate EPR schemes THE Polyolefin Responsibility Organisation (Polyco) is committed to growing the collection and recycling of polyolefin plastic packaging in South Africa and to promote the responsible use and reuse of this plastic packaging. After a special resolution vote at Polyco’s recent AGM about the proposed new extended producer responsibility (EPR) legislation, as contemplated under section 18(1) of the National Environmental Management: Waste Act, 2008, Polyco has once again proven its dedication to reduce the amount of plastics going to landfill and to end plastic waste in the environment. Polyco has committed to represent all three

responsibilities are performed. Under the pending EPR legislation, planned for implementation in 2021 by the Department of Forestry, Fisheries and Environment (DFFE), producers, through their producer responsibility organisations, will be mandated to manage their products at end-of-life to grow the downstream reuse and recycling of their materials to achieve agreed legislated targets. Within this pending legislation, the provision is made for separate EPR schemes for rigid polyolefin packaging, flexible polyolefin packaging and multilayer packaging. As Polyco’s current membership base comprises 95% rigid

SA Polymer Technology Summit Publishing - based in Cape Town, South Africa - launched SA Polymer Technology magazine in 2002 (then know by the title, SA Plastics, Rubber & Composites). Publisher, Martin Wells, has more than 35 years’ experience as a journalist and editor focusing on the polymer industry. The magazine is published six times a year in Feb, April, June, August, October and December and has a mailing list of over 2500 addresses. Our readers include individuals across the spectrum of the Southern African polymer industry – from equipment and material manufacturers and suppliers, their agents and principals, convertors, recyclers, raw material suppliers, product manufacturers and plastics services and ancillaries’ suppliers. Our readers also include members of research and development facilities in South Africa. www.sapt.co.za