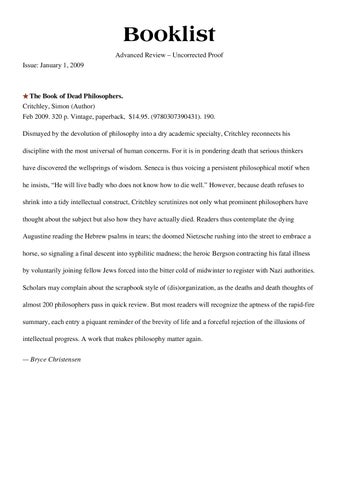 The Book of Dead Philosophers. Critchley, Simon (Author) Feb 2009. 320 p. Vintage, paperback, $14.95. (9780307390431). 190. Dismayed by the devolution of philosophy into a dry academic specialty, Critchley reconnects his discipline with the most universal of human concerns. For it is in pondering death that serious thinkers have discovered the wellsprings of wisdom. Seneca is thus voicing a persistent philosophical motif when he insists, “He will live badly who does not know how to die well.” However, because death refuses to shrink into a tidy intellectual construct, Critchley scrutinizes not only what prominent philosophers have thought about the subject but also how they have actually died. Readers thus contemplate the dying Augustine reading the Hebrew psalms in tears; the doomed Nietzsche rushing into the street to embrace a horse, so signaling a final descent into syphilitic madness; the heroic Bergson contracting his fatal illness by voluntarily joining fellow Jews forced into the bitter cold of midwinter to register with Nazi authorities. Scholars may complain about the scrapbook style of (dis)organization, as the deaths and death thoughts of almost 200 philosophers pass in quick review. But most readers will recognize the aptness of the rapid-fire summary, each entry a piquant reminder of the brevity of life and a forceful rejection of the illusions of intellectual progress. A work that makes philosophy matter again. — Bryce Christensen