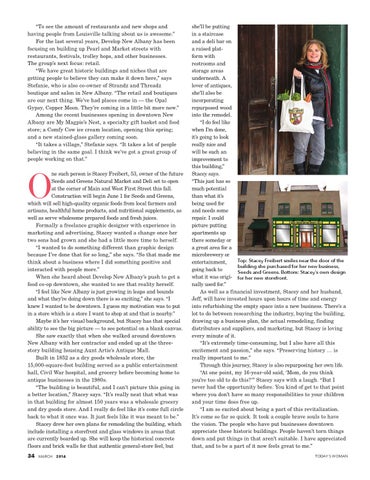 “To see the amount of restaurants and new shops and having people from Louisville talking about us is awesome.” For the last several years, Develop New Albany has been focusing on building up Pearl and Market streets with restaurants, festivals, trolley hops, and other businesses. The group’s next focus: retail. “We have great historic buildings and niches that are getting people to believe they can make it down here,” says Stefanie, who is also co-owner of Strandz and Threadz boutique and salon in New Albany. “The retail and boutiques are our next thing. We’ve had places come in — the Opal Gypsy, Copper Moon. They’re coming in a little bit more now.” Among the recent businesses opening in downtown New Albany are My Magpie’s Nest, a specialty gift basket and food store; a Comfy Cow ice cream location, opening this spring; and a new stained-glass gallery coming soon. “It takes a village,” Stefanie says. “It takes a lot of people believing in the same goal. I think we’ve got a great group of people working on that.”

ne such person is Stacey Freibert, 53, owner of the future Seeds and Greens Natural Market and Deli set to open at the corner of Main and West First Street this fall. Construction will begin June 1 for Seeds and Greens, which will sell high-quality organic foods from local farmers and artisans, healthful home products, and nutritional supplements, as well as serve wholesome prepared foods and fresh juices. Formally a freelance graphic designer with experience in marketing and advertising, Stacey wanted a change once her two sons had grown and she had a little more time to herself. “I wanted to do something different than graphic design because I’ve done that for so long,” she says. “So that made me think about a business where I did something positive and interacted with people more.” When she heard about Develop New Albany’s push to get a food co-op downtown, she wanted to see that reality herself. “I feel like New Albany is just growing in leaps and bounds and what they’re doing down there is so exciting,” she says. “I knew I wanted to be downtown. I guess my motivation was to put in a store which is a store I want to shop at and that is nearby.” Maybe it’s her visual background, but Stacey has that special ability to see the big picture — to see potential on a blank canvas. She saw exactly that when she walked around downtown New Albany with her contractor and ended up at the threestory building housing Aunt Artie’s Antique Mall. Built in 1852 as a dry goods wholesale store, the 15,000-square-foot building served as a public entertainment hall, Civil War hospital, and grocery before becoming home to antique businesses in the 1980s. “The building is beautiful, and I can’t picture this going in a better location,” Stacey says. “It’s really neat that what was in that building for almost 150 years was a wholesale grocery and dry goods store. And I really do feel like it’s come full circle back to what it once was. It just feels like it was meant to be.” Stacey drew her own plans for remodeling the building, which include installing a storefront and glass windows in areas that are currently boarded up. She will keep the historical concrete floors and brick walls for that authentic general-store feel, but

she’ll be putting in a staircase and a deli bar on a raised platform with restrooms and storage areas underneath. A lover of antiques, she’ll also be incorporating repurposed wood into the remodel. “I do feel like when I’m done, it’s going to look really nice and will be such an improvement to this building,” Stacey says. “This just has so much potential than what it’s being used for and needs some repair. I could picture putting apartments up there someday or a great area for a microbrewery or Top: Stacey Freibert smiles near the door of the entertainment, building she purchased for her new business, going back to Seeds and Greens. Bottom: Stacey’s own design what it was origi- for her new storefront. nally used for.” As well as a financial investment, Stacey and her husband, Jeff, will have invested hours upon hours of time and energy into refurbishing the empty space into a new business. There’s a lot to do between researching the industry, buying the building, drawing up a business plan, the actual remodeling, finding distributors and suppliers, and marketing, but Stacey is loving every minute of it. “It’s extremely time-consuming, but I also have all this excitement and passion,” she says. “Preserving history … is really important to me.” Through this journey, Stacey is also repurposing her own life. “At one point, my 16-year-old said, ‘Mom, do you think you’re too old to do this?’” Stacey says with a laugh. “But I never had the opportunity before. You kind of get to that point where you don’t have so many responsibilities to your children and your time does free up. “I am so excited about being a part of this revitalization. It’s come so far so quick. It took a couple brave souls to have the vision. The people who have put businesses downtown appreciate these historic buildings. People haven’t torn things down and put things in that aren’t suitable. I have appreciated that, and to be a part of it now feels great to me.” TODAY’S WOMAN

Our Repurposing Issue - What Can YOU Make New?

Our Repurposing Issue - What Can YOU Make New?