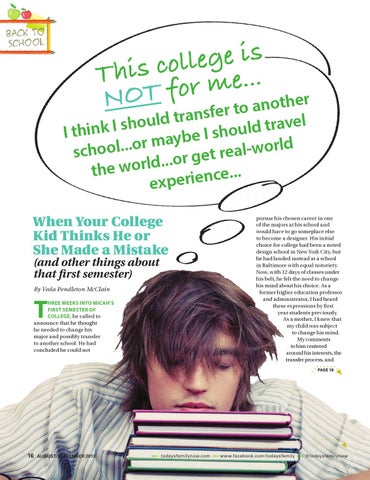 hree weeks into Micahâ&#x20AC;&#x2122;s first semester of college, he called to announce that he thought he needed to change his major and possibly transfer to another school. He had concluded he could not

pursue his chosen career in one of the majors at his school and would have to go someplace else to become a designer. His initial choice for college had been a noted design school in New York City, but he had landed instead at a school in Baltimore with equal notoriety. Now, with 12 days of classes under his belt, he felt the need to change his mind about his choice. As a former higher education professor and administrator, I had heard these expressions by first year students previously. As a mother, I knew that my child was subject to change his mind. My comments to him centered around his interests, the transfer process, and page 18