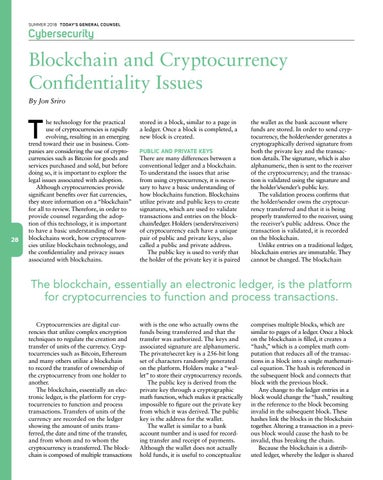 he technology for the practical use of cryptocurrencies is rapidly evolving, resulting in an emerging trend toward their use in business. Companies are considering the use of cryptocurrencies such as Bitcoin for goods and services purchased and sold, but before doing so, it is important to explore the legal issues associated with adoption. Although cryptocurrencies provide significant benefits over fiat currencies, they store information on a “blockchain” for all to review. Therefore, in order to provide counsel regarding the adoption of this technology, it is important to have a basic understanding of how blockchains work, how cryptocurrencies utilize blockchain technology, and the confidentiality and privacy issues associated with blockchains.

stored in a block, similar to a page in a ledger. Once a block is completed, a new block is created. PUBLIC AND PRIVATE KEYS

There are many differences between a conventional ledger and a blockchain. To understand the issues that arise from using cryptocurrency, it is necessary to have a basic understanding of how blockchains function. Blockchains utilize private and public keys to create signatures, which are used to validate transactions and entries on the blockchain/ledger. Holders (senders/receivers) of cryptocurrency each have a unique pair of public and private keys, also called a public and private address. The public key is used to verify that the holder of the private key it is paired

the wallet as the bank account where funds are stored. In order to send cryptocurrency, the holder/sender generates a cryptographically derived signature from both the private key and the transaction details. The signature, which is also alphanumeric, then is sent to the receiver of the cryptocurrency; and the transaction is validated using the signature and the holder’s/sender’s public key. The validation process confirms that the holder/sender owns the cryptocurrency transferred and that it is being properly transferred to the receiver, using the receiver’s public address. Once the transaction is validated, it is recorded on the blockchain. Unlike entries on a traditional ledger, blockchain entries are immutable. They cannot be changed. The blockchain

with is the one who actually owns the funds being transferred and that the transfer was authorized. The keys and associated signature are alphanumeric. The private/secret key is a 256-bit long set of characters randomly generated on the platform. Holders make a “wallet” to store their cryptocurrency records. The public key is derived from the private key through a cryptographic math function, which makes it practically impossible to figure out the private key from which it was derived. The public key is the address for the wallet. The wallet is similar to a bank account number and is used for recording transfer and receipt of payments. Although the wallet does not actually hold funds, it is useful to conceptualize

comprises multiple blocks, which are similar to pages of a ledger. Once a block on the blockchain is filled, it creates a “hash,” which is a complex math computation that reduces all of the transactions in a block into a single mathematical equation. The hash is referenced in the subsequent block and connects that block with the previous block. Any change to the ledger entries in a block would change the “hash,” resulting in the reference to the block becoming invalid in the subsequent block. These hashes link the blocks in the blockchain together. Altering a transaction in a previous block would cause the hash to be invalid, thus breaking the chain. Because the blockchain is a distributed ledger, whereby the ledger is shared

The list of things that separate us has become so long that it sometimes seems as if the Divided States of America might be a better name fo...

The list of things that separate us has become so long that it sometimes seems as if the Divided States of America might be a better name fo...