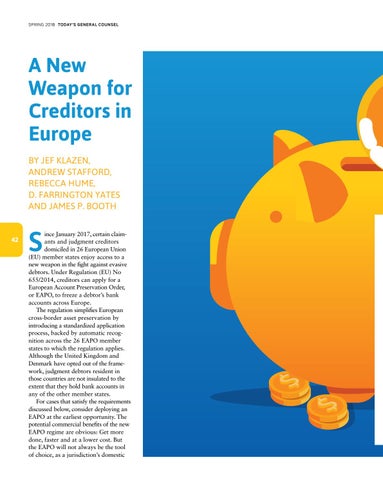 ince January 2017, certain claimants and judgment creditors domiciled in 26 European Union (EU) member states enjoy access to a new weapon in the fight against evasive debtors. Under Regulation (EU) No 655/2014, creditors can apply for a European Account Preservation Order, or EAPO, to freeze a debtor’s bank accounts across Europe. The regulation simplifies European cross-border asset preservation by introducing a standardized application process, backed by automatic recognition across the 26 EAPO member states to which the regulation applies. Although the United Kingdom and Denmark have opted out of the framework, judgment debtors resident in those countries are not insulated to the extent that they hold bank accounts in any of the other member states. For cases that satisfy the requirements discussed below, consider deploying an EAPO at the earliest opportunity. The potential commercial benefits of the new EAPO regime are obvious: Get more done, faster and at a lower cost. But the EAPO will not always be the tool of choice, as a jurisdiction’s domestic