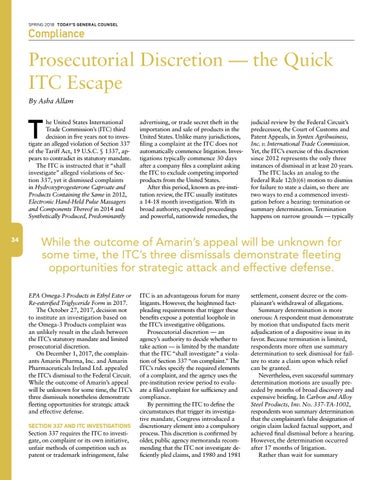 he United States International Trade Commission’s (ITC) third decision in five years not to investigate an alleged violation of Section 337 of the Tariff Act, 19 U.S.C. § 1337, appears to contradict its statutory mandate. The ITC is instructed that it “shall investigate” alleged violations of Section 337, yet it dismissed complaints in Hydroxyprogesterone Caproate and Products Containing the Same in 2012, Electronic Hand-Held Pulse Massagers and Components Thereof in 2014 and Synthetically Produced, Predominantly

advertising, or trade secret theft in the importation and sale of products in the United States. Unlike many jurisdictions, filing a complaint at the ITC does not automatically commence litigation. Investigations typically commence 30 days after a company files a complaint asking the ITC to exclude competing imported products from the United States. After this period, known as pre-institution review, the ITC usually institutes a 14-18 month investigation. With its broad authority, expedited proceedings and powerful, nationwide remedies, the

judicial review by the Federal Circuit’s predecessor, the Court of Customs and Patent Appeals, in Syntex Agribusiness, Inc. v. International Trade Commission. Yet, the ITC’s exercise of this discretion since 2012 represents the only three instances of dismissal in at least 20 years. The ITC lacks an analog to the Federal Rule 12(b)(6) motion to dismiss for failure to state a claim, so there are two ways to end a commenced investigation before a hearing: termination or summary determination. Termination happens on narrow grounds — typically

Section 337 requires the ITC to investigate, on complaint or its own initiative, unfair methods of competition such as patent or trademark infringement, false

ITC is an advantageous forum for many litigants. However, the heightened factpleading requirements that trigger these benefits expose a potential loophole in the ITC’s investigative obligations. Prosecutorial discretion — an agency’s authority to decide whether to take action — is limited by the mandate that the ITC “shall investigate” a violation of Section 337 “on complaint.” The ITC’s rules specify the required elements of a complaint, and the agency uses the pre-institution review period to evaluate a filed complaint for sufficiency and compliance. By permitting the ITC to define the circumstances that trigger its investigative mandate, Congress introduced a discretionary element into a compulsory process. This discretion is confirmed by older, public agency memoranda recommending that the ITC not investigate deficiently pled claims, and 1980 and 1981