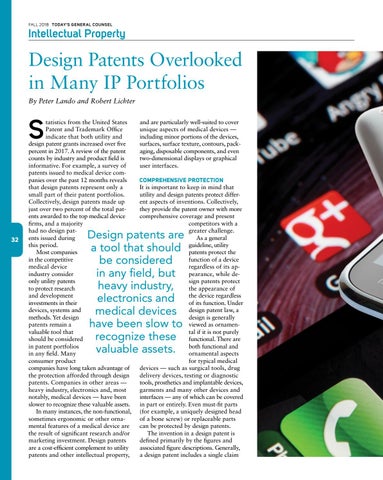 tatistics from the United States Patent and Trademark Office indicate that both utility and design patent grants increased over five percent in 2017. A review of the patent counts by industry and product field is informative. For example, a survey of patents issued to medical device companies over the past 12 months reveals that design patents represent only a small part of their patent portfolios. Collectively, design patents made up just over two percent of the total patents awarded to the top medical device firms, and a majority had no design patents issued during this period. Most companies in the competitive medical device industry consider only utility patents to protect research and development investments in their devices, systems and methods. Yet design patents remain a valuable tool that should be considered in patent portfolios in any field. Many consumer product companies have long taken advantage of the protection afforded through design patents. Companies in other areas — heavy industry, electronics and, most notably, medical devices — have been slower to recognize these valuable assets. In many instances, the non-functional, sometimes ergonomic or other ornamental features of a medical device are the result of significant research and/or marketing investment. Design patents are a cost-efficient complement to utility patents and other intellectual property,

It is important to keep in mind that utility and design patents protect different aspects of inventions. Collectively, they provide the patent owner with more comprehensive coverage and present competitors with a greater challenge. As a general guideline, utility patents protect the function of a device regardless of its appearance, while design patents protect the appearance of the device regardless of its function. Under design patent law, a design is generally viewed as ornamental if it is not purely functional. There are both functional and ornamental aspects for typical medical devices — such as surgical tools, drug delivery devices, testing or diagnostic tools, prosthetics and implantable devices, garments and many other devices and interfaces — any of which can be covered in part or entirely. Even must-fit parts (for example, a uniquely designed head of a bone screw) or replaceable parts can be protected by design patents. The invention in a design patent is defined primarily by the figures and associated figure descriptions. Generally, a design patent includes a single claim

Design patents are a tool that should be considered in any field, but heavy industry, electronics and medical devices have been slow to recognize these valuable assets.

Once upon a time the EU was a trusted trading partner of the United States. That was pre-Brexit and the present administration’s tariff regi...

Once upon a time the EU was a trusted trading partner of the United States. That was pre-Brexit and the present administration’s tariff regi...