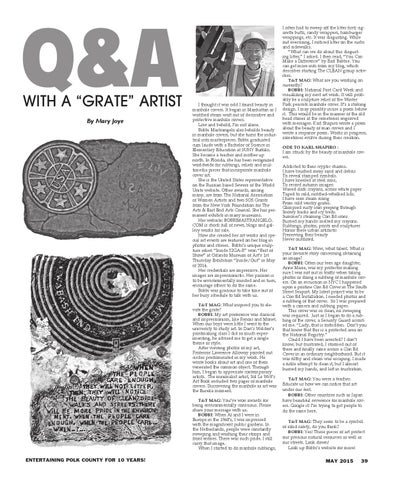 WITH A “GRATE” ARTIST By Mary Joye

I thought it was odd I found beauty in manhole covers. It began in Manhattan as I watched steam waft out of decorative and protective manhole covers. Low and behold, I’m not alone. Bobbi Mastrangelo also beholds beauty in manhole covers, but she turns the industrial into masterpieces. Bobbi graduated cum laude with a Bachelor of Science in Elementary Education at SUNY Buffalo. She became a teacher and mother up north. In Florida, she has been recognized worldwide for rubbings, reliefs and multimedia pieces that incorporate manhole cover art. She is the United States representative on the Russian based Sewers of the World Unite website. Other awards, among many, are from The National Association of Women Artists and two SOS Grants from the New York Foundation for The Arts &amp; East End Arts Council. She has permanent exhibits in many museums. Her website: BOBBIMASTRANGELO. COM is chock full of news, blogs and gallery works for sale. How she created her art works and special art events are featured on her blog in photos and stories. Bobbi’s unique sculpture relief: “Inside 52GA-R” won “Best of Show” at Orlando Museum of Art’s 1st Thursday Exhibition “Inside/Out” in May of 2014. Her credentials are impressive. Her images are impressionistic. Her passion is to be environmentally minded and in turn, encourage others to do the same. Bobbi was gracious to take time out of her busy schedule to talk with us. T&amp;T MAG: What inspired you to elevate the grate? BOBBI: My art preference was classical and impressionism, like Renoir and Monet. When our boys were little I went to the university to study art. In Dan’s Welden’s printmaking class I did so much experimenting, he advised me to get a single theme or style. After viewing photos of my art, Professor Lawrence Alloway pointed out circles predominated in my work. He wrote books about art and one of them venerated the common object. Through him, I began to appreciate contemporary artists. The minimalist artist, Sol Le Witt’s Art Book included two pages of manhole covers. Discovering the manhole as art was the Eureka moment. T&amp;T MAG: You’ve won awards for being environmentally conscious. Please share your message with us. BOBBI: When Al and I were in Europe in the 1960’s, I was impressed with the magnificent public gardens. In the Netherlands, people were constantly sweeping and washing their stoops and front entries. There was such pride. I still carry that image. When I started to do manhole rubbings,

I often had to sweep off the litter first; cigarette butts, candy wrappers, hamburger wrappings, etc. It was disgusting. While out exercising, I noticed litter on the curbs and sidewalks. “What can we do about this disgusting litter,” I asked. I then read, “You Can Make a Difference” by Earl Babbie. You can get more info from my blog, which describes starting The CLEAN group activities. T&amp;T MAG: What are you working on currently? BOBBI: National Post Card Week and visualizing my next art work. It will probably be a sculpture relief of the Winter Park peacock manhole cover. It’s a striking design. I may possibly incise a poem below it. This would be in the manner of the old head stones at the cemeteries engraved with messages. Karl Shapiro wrote a poem about the beauty of man covers and I wrote a response poem. Works in progress, sometimes evolve during their creation. ODE TO KARL SHAPIRO : I am struck by the beauty of manhole covers. Addicted to their cryptic charms. I have brushed away sand and debris To reveal stamped symbols. I have kneeled at steel rims, To record autumn images: Waxed dark crayons, across white paper Taped to cold, notched-whelked lids. I have seen steam rising From cold wintry grates. Glimpsed rusty iron peeping through Snowy tracks and icy treds. Summer’s steaming Con Ed irons Burned my hands: melted my crayons. Rubbings, photos, prints and sculptures Honor these urban artifacts: Preserving their beauty Never outdated. T&amp;T MAG: Wow, what talent. What is your favorite story concerning obtaining an image? BOBBI: Often our teen age daughter, Anne Marie, was my protector making sure I was not out in traffic when taking photos or doing a rubbing of manhole covers. On an excursion in NYC I happened upon a pristine Con Ed Cover in The South Street Seaport. My latest project was to be a Con Ed Installation. I needed photos and a rubbing of that cover. So I was prepared with a camera and rubbing paper. This cover was so clean, no sweeping was required. Just as I began to do a rubbing of the cover, a Security Guard accosted me. “Lady, that is forbidden. Don’t you that know that this is a protected area on the National Registry.” Could I have been arrested? I don’t know, but frustrated, I stormed out of there and finally came across a Con Ed Cover in an ordinary neighborhood. But it was filthy and steam was escaping. I made a futile attempt to clean it, but I almost burned my hands, and left in frustration. T&amp;T MAG: You were a teacher. Educate us how we can notice that art under our feet. BOBBI: Other countries such as Japan have beautiful reverence for manhole covers. Google it! I’m trying to get people to do the same here. T&amp;T MAG: They seem to be a symbol of solid safety, do you think? BOBBI: Yes! These pieces of art protect our precious natural resources as well as our streets. Look down! Look up Bobbi’s website for more! 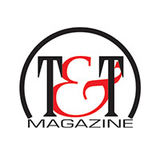