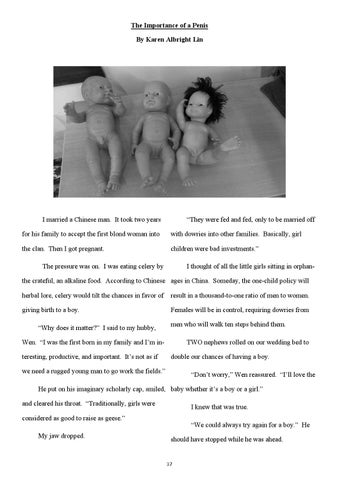 The Importance of a Penis

I married a Chinese man. It took two years

“They were fed and fed, only to be married off

for his family to accept the first blond woman into

with dowries into other families. Basically, girl

the clan. Then I got pregnant.

The pressure was on. I was eating celery by

I thought of all the little girls sitting in orphan-

the crateful, an alkaline food. According to Chinese ages in China. Someday, the one-child policy will herbal lore, celery would tilt the chances in favor of

result in a thousand-to-one ratio of men to women.

giving birth to a boy.

Females will be in control, requiring dowries from

“Why does it matter?” I said to my hubby,

men who will walk ten steps behind them.

Wen. “I was the first born in my family and I’m interesting, productive, and important. It’s not as if

TWO nephews rolled on our wedding bed to double our chances of having a boy.

we need a rugged young man to go work the fields.”

He put on his imaginary scholarly cap, smiled, baby whether it’s a boy or a girl.” and cleared his throat. “Traditionally, girls were

I knew that was true.

considered as good to raise as geese.” My jaw dropped.

“We could always try again for a boy.” He should have stopped while he was ahead. 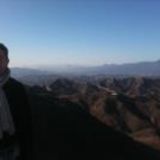