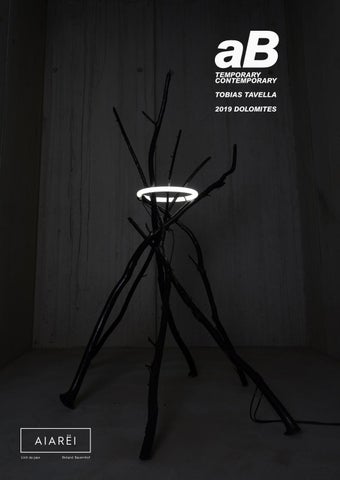 As a satellite of the “Trienala Ladina” exhibition “La post é la lerch” in the Museum Ladin, Tabias Tavella has set up another exhibition at his family’ s farm in Wengen/La Valle. Under the title “aB” he occupies the new stable, still unused by the cattle, with art and makes it both a studio and an exhibition space. The title refers to fragments of a bar sign, of which only two letters were found. Tavella contrasts natural forms like driftwood and branches with the geometric order of the built stable and geometric forms of fluorescent ringlights. We know “a” and “b” as variables in mathematics, with “a x b” an area is calculated.

The fact that the increased attention to space does not emerge from a purely academic discussion, but from fundamental changes in our environment explains the continuing and vast interest in spaces. The term â&amp;#x20AC;&amp;#x17E;cyberspaceâ&amp;#x20AC;&amp;#x153; which comes from science fiction literature (William Gibson) has also become a general reality.

For Tobias Tavella it is this intersubjective reality, the one that is relevant to the community, that is the value in itself at the centre of his work. His art is about a general examination of reality and space gain.

The idea of the eternal, which nature still comes close to, cannot redeem plastic. When the plasticizers in the plastic tent deceive themselves, when the macromolecules begin to dissolve, our commodities and consumer goods end up as plastic waste in the oceans of this world.

Tobias Tavella has weighted down the tent with his fatherâ&amp;#x20AC;&amp;#x2122;s collection of fossils and stones, thus contrasting transience and permanence as categories of the relationship between man and nature.

Tavella calls the concept for the wooden installations â&amp;#x20AC;&amp;#x153;temporary contemporaryâ&amp;#x20AC;?. In doing so, he introduces not only the concept of space but also that of time into his art. These sculptures are temporary sculptures, are sustainable in an ecological sense because they can be brought back into the forest as branches coming from the immediate surroundings.

Tobias Tavella has a double interest in space. On the one hand, there is the question of space philosophy and thus of limitation and opening, on the other hand there is also the spatial conditions for art itself, around its places such as studios and exhibition spaces. With his temporary spatial interventions, he reflects the social framework of art, its conditions of production and representation.

Tobias Tavella calls his artistic practice of temporary places of work and exhibition “dynamic studio practice”. He himself becomes a space-seeking nomad. Tobias Tavella has now found another space in the newly built stable at his childhood home. Here he works with different materials and media. “Objet trouvés” from nature, technology and everyday life he presents in new contexts and creates new realities.

Exhibitionspace in contrast with the tools and animals at the farm.

Driftwood and skateboars from different times

Branches from the immediate surroundings.

Branches from the immediate surroundings impregnated with black wax.

When Tobias Tavella impregnates these woods with black wax, he stops the decay of the wood. The time is stopped, so to speak, in the conservation, with the consciousness that the transience cannot be stopped.

Branches from the immediate surroundings impregnated with black wax combined with fluorescent ringlights.

Branches from the immediate surroundings.

Soundcarrier that activates the exhibition with the dimension of sound. 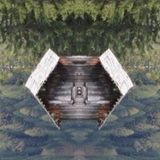