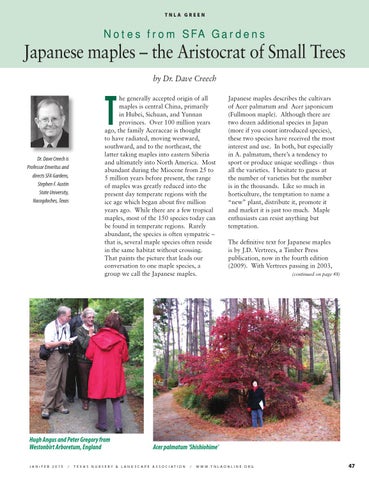 he generally accepted origin of all maples is central China, primarily in Hubei, Sichuan, and Yunnan provinces. Over 100 million years ago, the family Aceraceae is thought to have radiated, moving westward, southward, and to the northeast, the latter taking maples into eastern Siberia and ultimately into North America. Most abundant during the Miocene from 25 to 5 million years before present, the range of maples was greatly reduced into the present day temperate regions with the ice age which began about five million years ago. While there are a few tropical maples, most of the 150 species today can be found in temperate regions. Rarely abundant, the species is often sympatric – that is, several maple species often reside in the same habitat without crossing. That paints the picture that leads our conversation to one maple species, a group we call the Japanese maples.

Japanese maples describes the cultivars of Acer palmatum and Acer japonicum (Fullmoon maple). Although there are two dozen additional species in Japan (more if you count introduced species), these two species have received the most interest and use. In both, but especially in A. palmatum, there’s a tendency to sport or produce unique seedlings - thus all the varieties. I hesitate to guess at the number of varieties but the number is in the thousands. Like so much in horticulture, the temptation to name a “new” plant, distribute it, promote it and market it is just too much. Maple enthusiasts can resist anything but temptation. The definitive text for Japanese maples is by J.D. Vertrees, a Timber Press publication, now in the fourth edition (2009). With Vertrees passing in 2003, (continued on page 48)