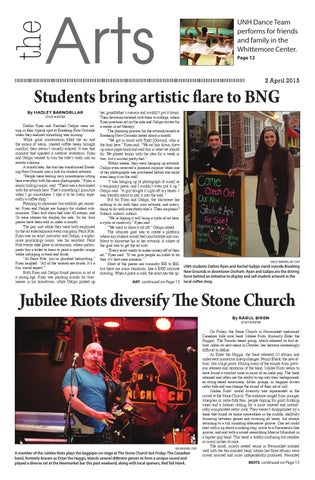 UNH Dance Team performs for friends and family in the Whittemore Center. Page 12

Dalton Ryan and Rachael Galipo were sitting in their typical spot at Breaking New Grounds when they realized something was missing. While good conversation ﬁlled the air and the aroma of warm, roasted coffee beans brought comfort, they weren’t visually enticed. It was that moment that sparked a creative revelation: Ryan and Galipo wanted to turn the cafe’s walls into an artistic sublime. A month later, the duo has transformed Breaking New Grounds into a hub for student artwork. “People were feeling very monotonous sitting here everyday with the same photographs,” Ryan, a senior biology major, said. “There was a disconnect with the artwork here. That’s something I prioritize when I go somewhere. I like it to be lively, especially a coffee shop.” Planning to showcase two exhibits per semester, Ryan and Galipo are hungry for student submissions. Their ﬁrst show had over 40 entries, and 26 were chosen for display for sale. So far, four pieces have been sold in under a month. The pair met while they were both employed by the art entertainment event company, Paint Nite. Ryan was an artist instructor and Galipo, a sophomore psychology major, was his assistant. Paint Nite events take place at restaurants, where participants buy a ticket to learn to paint a speciﬁc image while indulging in food and drink. “At Paint Nite, you’re gloriﬁed babysitting,” Ryan laughed. “All of the women are drunk. It’s a fun, social aspect.” Both Ryan and Galipo found passion in art at a young age. Ryan was painting murals for businesses in his hometown, while Galipo picked up

her grandfather’s camera and couldn’t put it down. Their devotion traveled with them to college, where Ryan practices art on the side and Galipo strives for a career in art therapy. The planning process for the artwork launch at Breaking New Grounds lasted about a month. “We got in touch with Todd [Govoni], who is the boss here,” Ryan said. “We sat him down, drew up some paperwork and said this is what we should do. We played tennis with the idea for a week or two, but it moved pretty fast.” Within weeks, they were hanging up artwork. Galipo even received a pleasant surprise when one of her photographs was purchased before she could even hang it on the wall. “I was hanging up [a photograph of mine] as a temporary piece, and I couldn’t even put it up,” Galipo said. “A guy bought it right off my hands. I was literally about to nail it into the wall.” But for Ryan and Galipo, the showcase has nothing to do with their own artwork, and everything to do with everybody else’s. Their emphasis? Submit, submit, submit. “We’re hoping it will bring a cycle of art here, a cycle of creativity,” Ryan said. “We want to show it all off,” Galipo added. The ultimate goal was to create a platform where any student would feel comfortable and conﬁdent to showcase his or her artwork. A subset of the goal was to get the art sold. “Every artist wants to make money off of their art,” Ryan said. “If we give people an outlet to do that, it’s best-case scenario.” HADLEY BARNDOLLAR/ STAFF Most of the pieces are currently $50 to $60, UNH students Dalton Ryan and Rachel Galipo stand outside Breaking but there are some standouts, like a $300 intricate New Grounds in downtown Durham. Ryan and Galipo are the driving drawing. When a piece is sold, the artist has the opforce behind an initiative to display and sell student artwork in the ART continued on Page 13 local coffee shop.

A member of the Jubilee Riots plays the bagpipes on stage at The Stone Church last Friday. The Canadian band, formerly-known as Enter the Haggis, blends several different genres to form a unique sound and played a diverse set at the Newmarket bar this past weekend, along with local openers, Red Tail Hawk.

On Friday, the Stone Church in Newmarket welcomed Canadian folk rock band Jubilee Riots (formerly Enter the Haggis). The Toronto based group, which released its ﬁrst album under its new name in October, has become increasingly difﬁcult to deﬁne. As Enter the Haggis, the band released 10 albums and underwent numerous lineup changes. Penny Black, the new album, hits a high point. Mixing many of the sounds from previous releases and iterations of the band, Jubilee Riots seems to have found a comfort zone in more of an indie pop. The band retained and often use the ability to tap into their backgrounds as string-based americana, dirtier grunge, or bagpipe driven celtic folk and can change the sound of their set at will. Jubilee Riots’ sound diversity was represented in the crowd at the Stone Church. The audience ranged from younger bluegrass or indie-folk fans, people hoping for good drinking tunes and a listener itching for a more layered and melodically complicated celtic rock. They weren’t disappointed by a band that found its home somewhere in the middle, skillfully bouncing between genres and covering all bases, but always returning to a full sounding alternative groove. One set could start with a jig about a sinking ship, move to a Raconteurs-like groove, and end with a sound resembling Marcus Mumford in a hipster pop band. This band is totally confusing but satisﬁes so many niches at once. The small, mostly seated venue in Newmarket meshed well with the fan-oriented band, whose last three albums were crowd sourced and more independently produced. Recorded 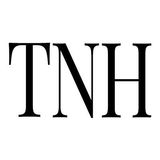