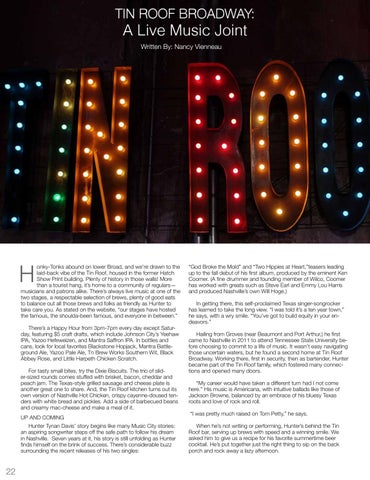 onky-Tonks abound on lower Broad, and we’re drawn to the laid-back vibe of the Tin Roof, housed in the former Hatch Show Print building. Plenty of history in those walls! More than a tourist hang, it’s home to a community of regulars— musicians and patrons alike. There’s always live music at one of the two stages, a respectable selection of brews, plenty of good eats to balance out all those brews and folks as friendly as Hunter to take care you. As stated on the website, “our stages have hosted the famous, the shoulda-been famous, and everyone in between.” There’s a Happy Hour from 3pm-7pm every day except Saturday, featuring $5 craft drafts, which include Johnson City’s Yeehaw IPA, Yazoo Hefeweizen, and Mantra Saffron IPA. In bottles and cans, look for local favorites Blackstone Hopjack, Mantra Battleground Ale, Yazoo Pale Ale, Tn Brew Works Southern Wit, Black Abbey Rose, and Little Harpeth Chicken Scratch. For tasty small bites, try the Dixie Biscuits. The trio of slider-sized rounds comes stuffed with brisket, bacon, cheddar and peach jam. The Texas-style grilled sausage and cheese plate is another great one to share. And, the Tin Roof kitchen turns out its own version of Nashville Hot Chicken, crispy cayenne-doused tenders with white bread and pickles. Add a side of barbecued beans and creamy mac-cheese and make a meal of it. UP AND COMING Hunter Tynan Davis’ story begins like many Music City stories: an aspiring songwriter steps off the safe path to follow his dream in Nashville. Seven years at it, his story is still unfolding as Hunter finds himself on the brink of success. There’s considerable buzz surrounding the recent releases of his two singles:

“God Broke the Mold” and “Two Hippies at Heart,”teasers leading up to the fall debut of his first album, produced by the eminent Ken Coomer. (A fine drummer and founding member of Wilco, Coomer has worked with greats such as Steve Earl and Emmy Lou Harris and produced Nashville’s own Will Hoge.) In getting there, this self-proclaimed Texas singer-songrocker has learned to take the long view. “I was told it’s a ten year town,” he says, with a wry smile. “You’ve got to build equity in your endeavors.” Hailing from Groves (near Beaumont and Port Arthur,) he first came to Nashville in 2011 to attend Tennessee State University before choosing to commit to a life of music. It wasn’t easy navigating those uncertain waters, but he found a second home at Tin Roof Broadway. Working there, first in security, then as bartender, Hunter became part of the Tin Roof family, which fostered many connections and opened many doors. “My career would have taken a different turn had I not come here.” His music is Americana, with intuitive ballads like those of Jackson Browne, balanced by an embrace of his bluesy Texas roots and love of rock and roll. “I was pretty much raised on Tom Petty,” he says. When he’s not writing or performing, Hunter’s behind the Tin Roof bar, serving up brews with speed and a winning smile. We asked him to give us a recipe for his favorite summertime beer cocktail. He’s put together just the right thing to sip on the back porch and rock away a lazy afternoon.

Tennessee Craft Beer Magazine explores all that is craft beer in Tennessee and throughout the South. Everything from recipes in the kitchen to the brew room in your garage. Places to visit for travel, entertainment, and adventure. The best stories about the best people in the Tennessee craft beer community. 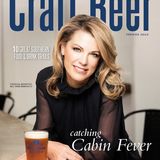 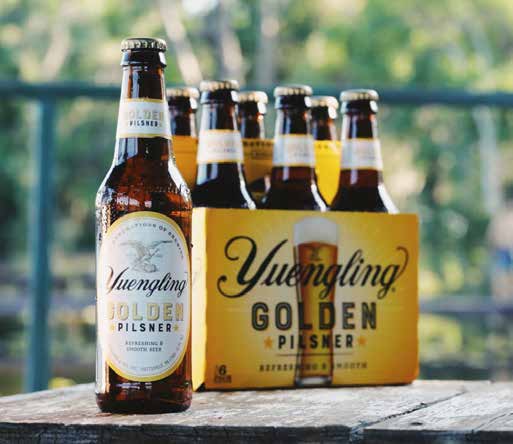 The history behind one of the world's favorite drinks.