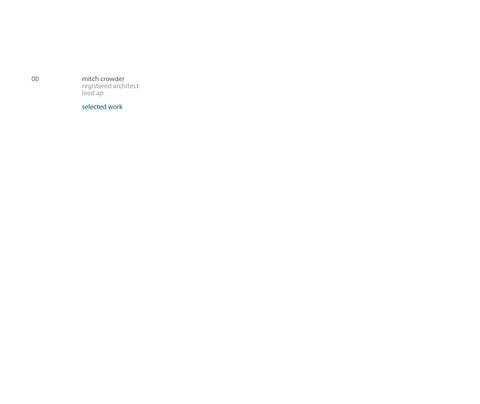 The 322,996sm courthouse is designed as a simple cube based on an 1.8 meter grid. The grid originates in plan, but is most evident on the buildingâ&#x20AC;&#x2122;s exterior where aluminum fins are placed at 300mm modules. The fin profiles vary in size and shape and are articulated to recognize the sunâ&#x20AC;&#x2122;s interaction with different facades. The screen covers the building as a Japanese screen that subtly displaying the interior functions to the exterior. Private areas read with more opacity and open to more public/transparent areas.

The buildingâ&#x20AC;&#x2122;s entry is on an asymmetrical east-west axis through a large stainless steel and glass clad portal. This portal leads to a triple height lobby where the occupant is introduced to a material palette of wood, glass and steel. A wood wall to the north and a cylindrical ceremonial stair to the west lock into their intended positions in the grid and inform occupants of the four square plan.

entry stair in lobby courtesy of Thomas Phifer and Partners

The courtrooms are placed at each corner of the four square plan and are composed of wood and glass walls. Transparency and security were of great concern to the client; however, the design intent was to break from the standard courtroom typology and allow light to penetrate into the space. This move not only involved a lengthy process of client education, but also required engineering studies with acoustics and day lighting.

This office complex for an undisclosed client houses a 22,405sm office building, 13,845sm parking structure, a 1368sm daycare facility as well as on-site surface parking in the Hato Rey district of San Juan, Puerto Rico. The buildingâ&#x20AC;&#x2122;s overall appearance and form is derived from various studies and client requirements. The shrouded appearance of the cantilevered structure is a product of the clientâ&#x20AC;&#x2122;s necessity to remain anonymous to the surrounding community. The screened facade also provides an opportunity to address the environmental issues that tend to affect a large glass facade in the Caribbean.

The buildingâ&#x20AC;&#x2122;s plan configuration pays homage to Old San Juanâ&#x20AC;&#x2122;s density and its utilization of interior courtyards to provide appropriate day lighting and natural ventilation for the hot and humid climate. Since the building program primarily looks inward, we saw these courtyards as an opportunity to connect the occupant to nature with varying types of gardens that would reflect the variety of natural landscapes found in Puerto Rico.

The program of the site and office building requires a unique entry sequence, which is atypical of most office buildings. The employee entrance is to be obscured from the public, allowing the workers to maintain their desired level of privacy from pedestrians and building visitors. The public enters the site through a large grove of existing mahogany trees to the north. The buildingâ&#x20AC;&#x2122;s low profile slowly appears, hovering over a large pool of water. Occupants enter the buildingâ&#x20AC;&#x2122;s interior through a small lobby flanked to the west by a courtyard that penetrates through the building, framing the sky.

The views to the outside of the building are skewed by an undulated screen composed of weaving perforated aluminum strips. This exterior treatment was necessary to blur the vision of the buildingâ&#x20AC;&#x2122;s interior, allowing the buildingâ&#x20AC;&#x2122;s inner workings to remain anonymous to the general public. We worked closely with our environmental engineers on the proportions of the space between the screen and the glass curtain wall, and on the rhythm of the weaving pattern for maximum benefits.

Designed for Tishman Speyer, this 450,000sf tower is located in the Financial District of San Francisco. The main design challenge was reinterpreting the traditional tiered tower model required by the City. We envisioned the tiered tower as an asymmetric stacking of volumes. Sizes and shifts required a careful analysis of portion, while maintaining the floor square footage set by city code and the developer. To create visual appeal to the exterior skin, various options were studied of modest shifts similar to the overall massing studies. The final outcome is a simple read of a building that skews the reflection of its context in hopes to minimize the mass of its body. The towerâ&#x20AC;&#x2122;s fine texture of black glass and stainless steel diminishes its brutal mass to an intricately woven garment. With Thomas Phifer as the design lead, the project was completed in 2016 by Gensler.

This 190,062sf addition of New York Law School was completed in 2009 and is located adjacent to the existing facility in Tribeca. The building is comprised of a three level library, seminar classrooms, and an interior and exterior rooftop lounge complimented by a student and faculty cafeteria. This highly activated facade not only provides a space for communication within the building, but also communicates the internal program of a law school to the surrounding urban context. The building radiates through the community as it never did before.

The main focus of the design team was to create a building where the design of collaborative space was just as critical as the design of classroom space. A constant discourse is part of the foundation of a law studentâ&#x20AC;&#x2122;s education and success. The architecture of a law school should anticipate for this discourse with the design communal areas outside the classroom. Wide public corridors adjacent a large floating glass wall, house circulation and informal lounge spaces for such activities to occur.

Quirk Charlottesville is the second location for the Quirk Hotel, a boutique art hotel. The 100,000 gsf, 80-room hotel is comprised of a contemporary art gallery, guest lounges, restaurants, event spaces, and a rooftop with panoramic views of the surrounding foothills. In addition, the project includes the renovation of two historical houses that are included in the hotel program. This project is currently in construction and scheduled for a December 2019 completion.

ARCHITECTUREFIRM partnered with District Quarters for the design and development of this 22 unit - 20,000 SF condominium building in southeast D.C. blocks from Eastern Market. The design of the white brick building takes its curved wall and bay language from the sorrounding row homes.

This project is currently in design and scheduled to begin construction in 2020.

Roof over penthouse 60’-0” above grade

Marvel Architects was awarded the contract to design and construct a 400,000gsf residential condo tower with Hudson Companies in September 2014. The RFP included the design of the core and shell of the luxury residential tower in addition to the shell of the Brooklyn Heights Public Library housed on the ground floor of the building. The design of the exterior of the building is a study of classical portions of the golden triangle that form a simplistic grid of limestone and bronze panels. The vertical rhythm of the 2, 3 and 4 floor stacking plays with the over all scale of the building and how it relates to surrounding downtown Brooklyn towers and the small residential scale of Brooklyn Heights. The triangular site allows for various readings of the grid and it's shifting portions.

The design of the library facade breaks down the scale of the tower grid to a finer grain composed of transparent and opaque panels. The existing mid-century designed library, known for it's dark spaces, will be replaced with a light-filled library that interacts with the surrounding street life of Brooklyn Heights and Downtown Brooklyn.

In partnership with Arup, Marvel Architects' approach to the design of two residential towers on Pier Six in Brooklyn Bridge Park explores the concept of the 'living building' for multi-family residential design. Mechanical systems and engineered facades respond to climatic shifts from day to night or season to season. The market rate and affordable towers actively engage with the landscape, while programmatically connecting the park to surrounding neighborhoods. The design and engineering of the buildings strive to connect the occupant to the growing ecological landscape of the 21st century city.

The following key factors have been developed with respect to thermal control, solar gain control, weather resistance, building energy use, daylighting performance, and occupants’ comfort, which consequently have influenced the design of the project:

Daylighting allows the perimeter lighting to be dimmed and thereby reduce lighting energy. Reducing lighting and plug loads has a dual benefit, since the wasted lighting energy that would normally be converted to heat within the space also reduces the cooling load in the summer

Insulation behind the trombe walls and double-paned, gas-filled glazing with low-e coating in a

North Facade: The fully-glazed north facade without an exterior shading system allows for diffuse daylight and a clear view to the outdoors. The unitized window-wall system with some operable windows for natural ventilation will be a homogeneous system used on all facades.

perform as a pressure equalized weather-resistant barrier. Additionally, the rain screen system has been designed with a light weight back-up structure and metal panels to reduce the load imposed on the primary building structure. •

will include a 29-story mixed-use condominium cont

Development Guidelines provided in the RFP, and th above grade with all mechanical systems, amenity

ground floor retail that will connect with Brooklyn Br

A new social media campus forms in a linear east-west direction, anchored by the NY Times building. The campus is composed of a mixture public and private program with campus program highlighted within a composition of community amenities and reconfigured mass transit nodes. The existing ramps of the Port Authority Terminal remain as site relics and alternative public green space. Using the campus as a programmatic device, the project investigates the role of large scale transportation infrastructure within today's urban context and adaptability to the metropolitan grid of New York City. By the re scaling of infrastructure, the campus rethinks the role of the city block as a spine of integrated public and private function - building and open space that recreates an entry point to Manhattan.

one tunnel - one terminal

bus terminals connections to the city