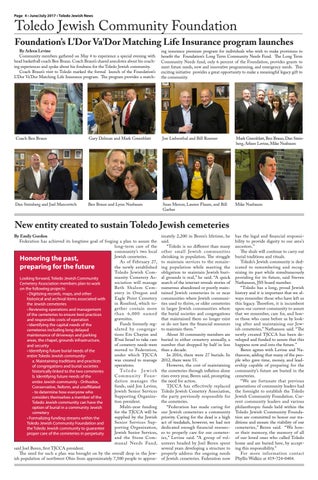 By Arleen Levine Community members gathered on May 4 to experience a special evening with head basketball coach Ben Braun. Coach Braun’s shared anecdotes about his coaching experiences and spoke about his fondness for the Toledo Jewish community. Coach Braun’s visit to Toledo marked the formal launch of the Foundation’s L’Dor Va’Dor Matching Life Insurance program. The program provides a match-

ing insurance premium program for individuals who wish to make provisions to benefit the Foundation’s Long Term Community Needs Fund. The Long Term Community Needs fund, only 6 percent of the Foundation, provides grants to meet future needs, new and innovative programming, and emergency needs. This exciting initiative provides a great opportunity to make a meaningful legacy gift to the community.

By Emily Gordon Federation has achieved its longtime goal of forging a plan to assure the long-term care of the community’s two local Jewish cemeteries. As of February 27, the newly established Toledo Jewish Community Cemetery AsLooking forward, Toledo Jewish Community sociation will manage Cemetery Association members plan to work Beth Shalom Cemon the following projects: etery in Oregon and • Digitizing records, maps, and other Eagle Point Cemetery historical and archival items associated with in Rossford, which tothe Jewish cemeteries gether contain more • Reviewing operations and management than 6,000 named of the cemeteries to ensure best practices gravesites. and responsible costs of operation Funds formerly reg• Identifying the capital needs of the ulated by congregacemeteries including long delayed tions Etz Chayim and maintenance of driveways and parking B’nai Israel to take care areas, the chapel, grounds infrastructure, of cemetery needs were and security moved to Federation, • Identifying future burial needs of the under which TJCCA entire Toledo Jewish communitywas created to manage a. Maintaining traditions and practices operations. of congregations and burial societies To l e d o J e w i s h historically linked to the two cemeteries C o m m u n i t y Fo u n b. Identifying future needs of the dation manages the entire Jewish community - Orthodox, funds, said Jon Levine, Conservative, Reform, and unaffiliated Jewish Senior Services - to determine how everyone who Supporting Organizaconsiders themselves a member of the tion president. Toledo Jewish community can have the Multi-year funding option of burial in a community Jewish for the TJCCA will be cemetery supplied by the Jewish • Formalizing funding streams within the Senior Services SupToledo Jewish Community Foundation and porting Organization, the Toledo Jewish community to guarantee Jewish Senior Services, proper care of the cemeteries in perpetuity and the Stone Communal Needs Fund, said Joel Beren, first TJCCA president. The need for such a plan was brought on by the overall drop in the Jewish population of northwest Ohio from approximately 7,500 people to approx-

Honoring the past, preparing for the future

imately 2,200 in Beren’s lifetime, he said. “Toledo is no different than many other small Jewish communities shrinking in population. The struggle to maintain services to the remaining population while meeting the obligation to maintain Jewish burial grounds is real,” he said. “A quick search of the internet reveals stories of numerous abandoned or poorly maintained Jewish cemeteries in or near communities where Jewish communities used to thrive, or older cemeteries in larger Jewish communities where the burial societies and congregations that maintained them no longer exist or do not have the financial resources to maintain them.” About 30 community members are buried in either cemetery annually, a number that dropped by half in less than a decade. In 2016, there were 27 burials. In 2012, there were 55. However, the cost of maintaining the cemeteries through inflation alone rises every year, Beren said, prompting the need for action. TJCCA has effectively replaced Toledo Jewish Cemetery Association, the party previously responsible for the cemeteries. “Federation has made caring for our Jewish cemeteries a community priority. Caring for the dead is a high act of tzedakah, however, we had not dedicated enough financial resources to properly care for our cemeteries,” Levine said. “A group of volunteers headed by Joel Beren spent several years developing a structure to properly address the ongoing needs of Jewish cemeteries. Federation now

has the legal and financial responsibility to provide dignity to our area&#39;s ancestors.” The shuls will continue to carry out burial traditions and rituals. Toledo’s Jewish community is dedicated to remembering and recognizing its past while simultaneously providing for its future, said Steven Nathanson, JSS board member. “Toledo has a long, proud Jewish history and it is important that we always remember those who have left us this legacy. Therefore, it is incumbent upon our current community to assure that we remember, care for, and honor those who came before us by looking after and maintaining our Jewish cemeteries,” Nathanson said. “The newly created TJCCA has been developed and funded to assure that this happens now and into the future.” Beren agrees with Levine and Nathanson, adding that many of the people who gave time, money, and leadership capable of preparing for the community’s future are buried in the cemeteries. “We are fortunate that previous generations of community leaders had the foresight to establish the Toledo Jewish Community Foundation. Current community leaders and various philanthropic funds held within the Toledo Jewish Community Foundation are committed to honor our traditions and ensure the viability of our cemeteries,” Beren said. “We honor their memory, the memory of all of our loved ones who called Toledo home and are buried here, by accepting this responsibility.” For more information contact Phyllis Walkin at 419-724-0404.