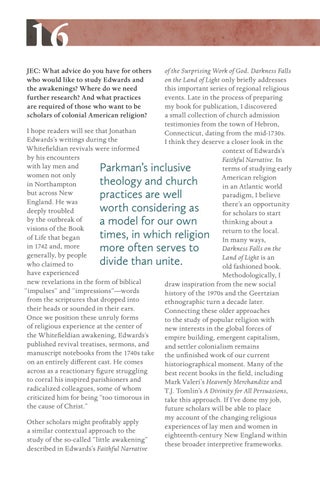 16 JEC: What advice do you have for others who would like to study Edwards and the awakenings? Where do we need further research? And what practices are required of those who want to be scholars of colonial American religion? I hope readers will see that Jonathan Edwards’s writings during the Whitefieldian revivals were informed by his encounters with lay men and women not only in Northampton but across New England. He was deeply troubled by the outbreak of visions of the Book of Life that began in 1742 and, more generally, by people who claimed to have experienced new revelations in the form of biblical “impulses” and “impressions”—words from the scriptures that dropped into their heads or sounded in their ears. Once we position these unruly forms of religious experience at the center of the Whitefieldian awakening, Edwards’s published revival treatises, sermons, and manuscript notebooks from the 1740s take on an entirely different cast. He comes across as a reactionary figure struggling to corral his inspired parishioners and radicalized colleagues, some of whom criticized him for being “too timorous in the cause of Christ.”

of the Surprising Work of God. Darkness Falls on the Land of Light only briefly addresses this important series of regional religious events. Late in the process of preparing my book for publication, I discovered a small collection of church admission testimonies from the town of Hebron, Connecticut, dating from the mid-1730s. I think they deserve a closer look in the context of Edwards’s Faithful Narrative. In terms of studying early American religion in an Atlantic world paradigm, I believe there’s an opportunity for scholars to start thinking about a return to the local. In many ways, Darkness Falls on the Land of Light is an old fashioned book. Methodologically, I draw inspiration from the new social history of the 1970s and the Geertzian ethnographic turn a decade later. Connecting these older approaches to the study of popular religion with new interests in the global forces of empire building, emergent capitalism, and settler colonialism remains the unfinished work of our current historiographical moment. Many of the best recent books in the field, including Mark Valeri’s Heavenly Merchandize and T.J. Tomlin’s A Divinity for All Persuasions, take this approach. If I’ve done my job, future scholars will be able to place my account of the changing religious experiences of lay men and women in eighteenth-century New England within these broader interpretive frameworks.

Parkman’s inclusive theology and church practices are well worth considering as a model for our own times, in which religion more often serves to divide than unite. 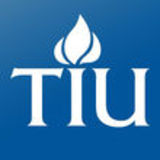 In the Edwards Center’s newsletter (jecteds.org), you will find a summary of all that’s happening in the world of Jonathan Edwards, includin...

In the Edwards Center’s newsletter (jecteds.org), you will find a summary of all that’s happening in the world of Jonathan Edwards, includin...