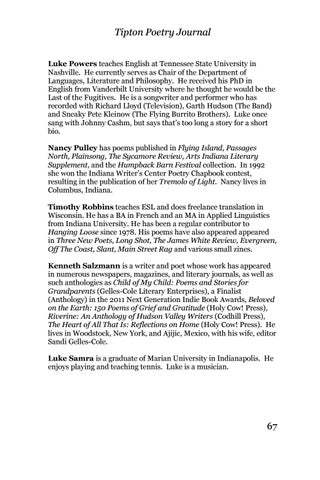 Tipton Poetry Journal Luke Powers teaches English at Tennessee State University in Nashville. He currently serves as Chair of the Department of Languages, Literature and Philosophy. He received his PhD in English from Vanderbilt University where he thought he would be the Last of the Fugitives. He is a songwriter and performer who has recorded with Richard Lloyd (Television), Garth Hudson (The Band) and Sneaky Pete Kleinow (The Flying Burrito Brothers). Luke once sang with Johnny Cashm, but says thatâ&#x20AC;&#x2122;s too long a story for a short bio. Nancy Pulley has poems published in Flying Island, Passages North, Plainsong, The Sycamore Review, Arts Indiana Literary Supplement, and the Humpback Barn Festival collection. In 1992 she won the Indiana Writerâ&#x20AC;&#x2122;s Center Poetry Chapbook contest, resulting in the publication of her Tremolo of Light. Nancy lives in Columbus, Indiana. Timothy Robbins teaches ESL and does freelance translation in Wisconsin. He has a BA in French and an MA in Applied Linguistics from Indiana University. He has been a regular contributor to Hanging Loose since 1978. His poems have also appeared appeared in Three New Poets, Long Shot, The James White Review, Evergreen, Off The Coast, Slant, Main Street Rag and various small zines. Kenneth Salzmann is a writer and poet whose work has appeared in numerous newspapers, magazines, and literary journals, as well as such anthologies as Child of My Child: Poems and Stories for Grandparents (Gelles-Cole Literary Enterprises), a Finalist (Anthology) in the 2011 Next Generation Indie Book Awards, Beloved on the Earth: 150 Poems of Grief and Gratitude (Holy Cow! Press), Riverine: An Anthology of Hudson Valley Writers (Codhill Press), The Heart of All That Is: Reflections on Home (Holy Cow! Press). He lives in Woodstock, New York, and Ajijic, Mexico, with his wife, editor Sandi Gelles-Cole. Luke Samra is a graduate of Marian University in Indianapolis. He enjoys playing and teaching tennis. Luke is a musician.