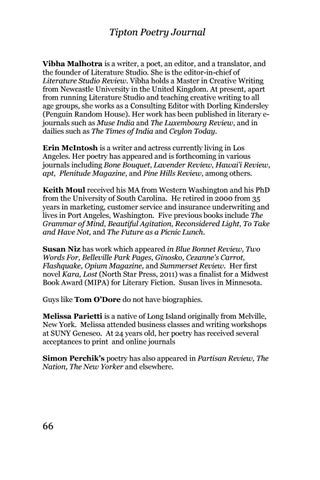 Tipton Poetry Journal Vibha Malhotra is a writer, a poet, an editor, and a translator, and the founder of Literature Studio. She is the editor-in-chief of Literature Studio Review. Vibha holds a Master in Creative Writing from Newcastle University in the United Kingdom. At present, apart from running Literature Studio and teaching creative writing to all age groups, she works as a Consulting Editor with Dorling Kindersley (Penguin Random House). Her work has been published in literary ejournals such as Muse India and The Luxembourg Review, and in dailies such as The Times of India and Ceylon Today. Erin McIntosh is a writer and actress currently living in Los Angeles. Her poetry has appeared and is forthcoming in various journals including Bone Bouquet, Lavender Review, Hawai’i Review, apt, Plenitude Magazine, and Pine Hills Review, among others. Keith Moul received his MA from Western Washington and his PhD from the University of South Carolina. He retired in 2000 from 35 years in marketing, customer service and insurance underwriting and lives in Port Angeles, Washington. Five previous books include The Grammar of Mind, Beautiful Agitation, Reconsidered Light, To Take and Have Not, and The Future as a Picnic Lunch. Susan Niz has work which appeared in Blue Bonnet Review, Two Words For, Belleville Park Pages, Ginosko, Cezanne's Carrot, Flashquake, Opium Magazine, and Summerset Review. Her first novel Kara, Lost (North Star Press, 2011) was a finalist for a Midwest Book Award (MIPA) for Literary Fiction. Susan lives in Minnesota. Guys like Tom O’Dore do not have biographies. Melissa Parietti is a native of Long Island originally from Melville, New York. Melissa attended business classes and writing workshops at SUNY Geneseo. At 24 years old, her poetry has received several acceptances to print and online journals Simon Perchik’s poetry has also appeared in Partisan Review, The Nation, The New Yorker and elsewhere.