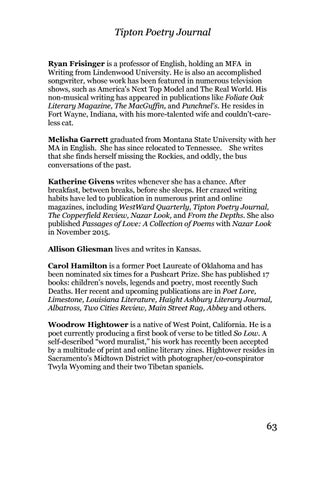 Tipton Poetry Journal Ryan Frisinger is a professor of English, holding an MFA in Writing from Lindenwood University. He is also an accomplished songwriter, whose work has been featured in numerous television shows, such as America's Next Top Model and The Real World. His non-musical writing has appeared in publications like Foliate Oak Literary Magazine, The MacGuffin, and Punchnel's. He resides in Fort Wayne, Indiana, with his more-talented wife and couldn’t-careless cat. Melisha Garrett graduated from Montana State University with her MA in English. She has since relocated to Tennessee. She writes that she finds herself missing the Rockies, and oddly, the bus conversations of the past. Katherine Givens writes whenever she has a chance. After breakfast, between breaks, before she sleeps. Her crazed writing habits have led to publication in numerous print and online magazines, including WestWard Quarterly, Tipton Poetry Journal, The Copperfield Review, Nazar Look, and From the Depths. She also published Passages of Love: A Collection of Poems with Nazar Look in November 2015. Allison Gliesman lives and writes in Kansas. Carol Hamilton is a former Poet Laureate of Oklahoma and has been nominated six times for a Pushcart Prize. She has published 17 books: children’s novels, legends and poetry, most recently Such Deaths. Her recent and upcoming publications are in Poet Lore, Limestone, Louisiana Literature, Haight Ashbury Literary Journal, Albatross, Two Cities Review, Main Street Rag, Abbey and others. Woodrow Hightower is a native of West Point, California. He is a poet currently producing a first book of verse to be titled So Low. A self-described “word muralist,” his work has recently been accepted by a multitude of print and online literary zines. Hightower resides in Sacramento’s Midtown District with photographer/co-conspirator Twyla Wyoming and their two Tibetan spaniels.