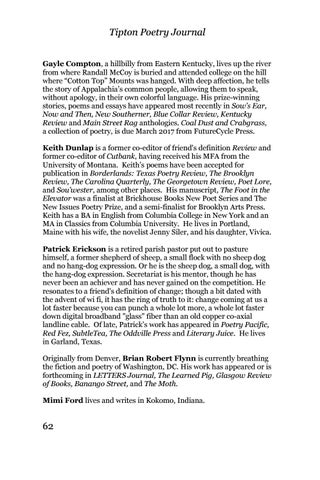 Tipton Poetry Journal Gayle Compton, a hillbilly from Eastern Kentucky, lives up the river from where Randall McCoy is buried and attended college on the hill where “Cotton Top” Mounts was hanged. With deep affection, he tells the story of Appalachia’s common people, allowing them to speak, without apology, in their own colorful language. His prize-winning stories, poems and essays have appeared most recently in Sow’s Ear, Now and Then, New Southerner, Blue Collar Review, Kentucky Review and Main Street Rag anthologies. Coal Dust and Crabgrass, a collection of poetry, is due March 2017 from FutureCycle Press. Keith Dunlap is a former co-editor of friend's definition Review and former co-editor of Cutbank, having received his MFA from the University of Montana. Keith’s poems have been accepted for publication in Borderlands: Texas Poetry Review, The Brooklyn Review, The Carolina Quarterly, The Georgetown Review, Poet Lore, and Sou’wester, among other places. His manuscript, The Foot in the Elevator was a finalist at Brickhouse Books New Poet Series and The New Issues Poetry Prize, and a semi-finalist for Brooklyn Arts Press. Keith has a BA in English from Columbia College in New York and an MA in Classics from Columbia University. He lives in Portland, Maine with his wife, the novelist Jenny Siler, and his daughter, Vivica. Patrick Erickson is a retired parish pastor put out to pasture himself, a former shepherd of sheep, a small flock with no sheep dog and no hang-dog expression. Or he is the sheep dog, a small dog, with the hang-dog expression. Secretariat is his mentor, though he has never been an achiever and has never gained on the competition. He resonates to a friend's definition of change; though a bit dated with the advent of wi fi, it has the ring of truth to it: change coming at us a lot faster because you can punch a whole lot more, a whole lot faster down digital broadband "glass" fiber than an old copper co-axial landline cable. Of late, Patrick’s work has appeared in Poetry Pacific, Red Fez, SubtleTea, The Oddville Press and Literary Juice. He lives in Garland, Texas. Originally from Denver, Brian Robert Flynn is currently breathing the fiction and poetry of Washington, DC. His work has appeared or is forthcoming in LETTERS Journal, The Learned Pig, Glasgow Review of Books, Banango Street, and The Moth. Mimi Ford lives and writes in Kokomo, Indiana.