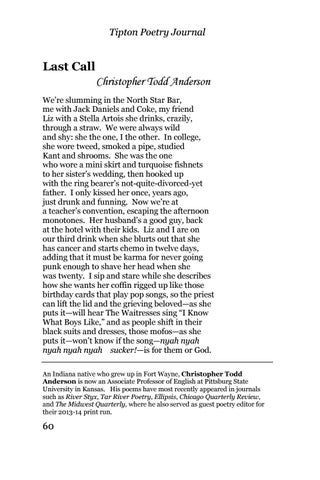 Last Call Christopher Todd Anderson We’re slumming in the North Star Bar, me with Jack Daniels and Coke, my friend Liz with a Stella Artois she drinks, crazily, through a straw. We were always wild and shy: she the one, I the other. In college, she wore tweed, smoked a pipe, studied Kant and shrooms. She was the one who wore a mini skirt and turquoise fishnets to her sister’s wedding, then hooked up with the ring bearer’s not-quite-divorced-yet father. I only kissed her once, years ago, just drunk and funning. Now we’re at a teacher’s convention, escaping the afternoon monotones. Her husband’s a good guy, back at the hotel with their kids. Liz and I are on our third drink when she blurts out that she has cancer and starts chemo in twelve days, adding that it must be karma for never going punk enough to shave her head when she was twenty. I sip and stare while she describes how she wants her coffin rigged up like those birthday cards that play pop songs, so the priest can lift the lid and the grieving beloved—as she puts it—will hear The Waitresses sing “I Know What Boys Like,” and as people shift in their black suits and dresses, those mofos—as she puts it—won’t know if the song—nyah nyah nyah nyah nyah sucker!—is for them or God. An Indiana native who grew up in Fort Wayne, Christopher Todd Anderson is now an Associate Professor of English at Pittsburg State University in Kansas. His poems have most recently appeared in journals such as River Styx, Tar River Poetry, Ellipsis, Chicago Quarterly Review, and The Midwest Quarterly, where he also served as guest poetry editor for their 2013-14 print run.