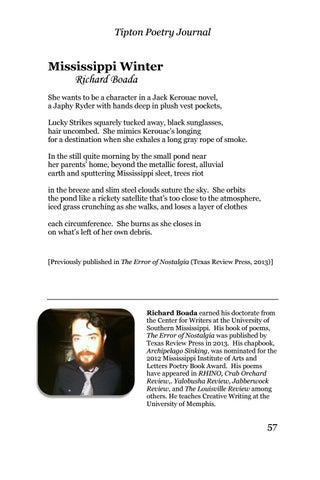 Mississippi Winter Richard Boada She wants to be a character in a Jack Kerouac novel, a Japhy Ryder with hands deep in plush vest pockets, Lucky Strikes squarely tucked away, black sunglasses, hair uncombed. She mimics Kerouac’s longing for a destination when she exhales a long gray rope of smoke. In the still quite morning by the small pond near her parents’ home, beyond the metallic forest, alluvial earth and sputtering Mississippi sleet, trees riot in the breeze and slim steel clouds suture the sky. She orbits the pond like a rickety satellite that’s too close to the atmosphere, iced grass crunching as she walks, and loses a layer of clothes each circumference. She burns as she closes in on what’s left of her own debris.

[Previously published in The Error of Nostalgia (Texas Review Press, 2013)]

Richard Boada earned his doctorate from the Center for Writers at the University of Southern Mississippi. His book of poems, The Error of Nostalgia was published by Texas Review Press in 2013. His chapbook, Archipelago Sinking, was nominated for the 2012 Mississippi Institute of Arts and Letters Poetry Book Award. His poems have appeared in RHINO, Crab Orchard Review,. Yalobusha Review, Jabberwock Review, and The Louisville Review among others. He teaches Creative Writing at the University of Memphis.