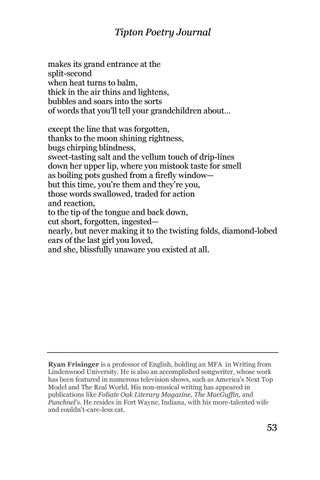 Tipton Poetry Journal makes its grand entrance at the split-second when heat turns to balm, thick in the air thins and lightens, bubbles and soars into the sorts of words that you’ll tell your grandchildren about… except the line that was forgotten, thanks to the moon shining rightness, bugs chirping blindness, sweet-tasting salt and the vellum touch of drip-lines down her upper lip, where you mistook taste for smell as boiling pots gushed from a firefly window— but this time, you’re them and they’re you, those words swallowed, traded for action and reaction, to the tip of the tongue and back down, cut short, forgotten, ingested— nearly, but never making it to the twisting folds, diamond-lobed ears of the last girl you loved, and she, blissfully unaware you existed at all.

Ryan Frisinger is a professor of English, holding an MFA in Writing from Lindenwood University. He is also an accomplished songwriter, whose work has been featured in numerous television shows, such as America's Next Top Model and The Real World. His non-musical writing has appeared in publications like Foliate Oak Literary Magazine, The MacGuffin, and Punchnel's. He resides in Fort Wayne, Indiana, with his more-talented wife and couldn’t-care-less cat.