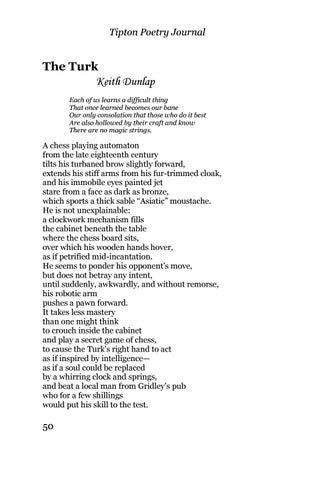 The Turk Keith Dunlap Each of us learns a difficult thing That once learned becomes our bane Our only consolation that those who do it best Are also hollowed by their craft and know There are no magic strings.

A chess playing automaton from the late eighteenth century tilts his turbaned brow slightly forward, extends his stiff arms from his fur-trimmed cloak, and his immobile eyes painted jet stare from a face as dark as bronze, which sports a thick sable “Asiatic” moustache. He is not unexplainable: a clockwork mechanism fills the cabinet beneath the table where the chess board sits, over which his wooden hands hover, as if petrified mid-incantation. He seems to ponder his opponent’s move, but does not betray any intent, until suddenly, awkwardly, and without remorse, his robotic arm pushes a pawn forward. It takes less mastery than one might think to crouch inside the cabinet and play a secret game of chess, to cause the Turk’s right hand to act as if inspired by intelligence— as if a soul could be replaced by a whirring clock and springs, and beat a local man from Gridley’s pub who for a few shillings would put his skill to the test.