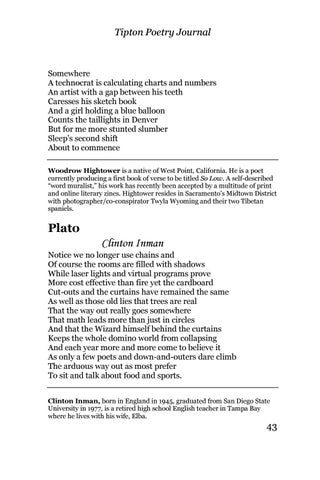 Somewhere A technocrat is calculating charts and numbers An artist with a gap between his teeth Caresses his sketch book And a girl holding a blue balloon Counts the taillights in Denver But for me more stunted slumber Sleep’s second shift About to commence Woodrow Hightower is a native of West Point, California. He is a poet currently producing a first book of verse to be titled So Low. A self-described “word muralist,” his work has recently been accepted by a multitude of print and online literary zines. Hightower resides in Sacramento’s Midtown District with photographer/co-conspirator Twyla Wyoming and their two Tibetan spaniels.

Plato Clinton Inman Notice we no longer use chains and Of course the rooms are filled with shadows While laser lights and virtual programs prove More cost effective than fire yet the cardboard Cut-outs and the curtains have remained the same As well as those old lies that trees are real That the way out really goes somewhere That math leads more than just in circles And that the Wizard himself behind the curtains Keeps the whole domino world from collapsing And each year more and more come to believe it As only a few poets and down-and-outers dare climb The arduous way out as most prefer To sit and talk about food and sports. Clinton Inman, born in England in 1945, graduated from San Diego State University in 1977, is a retired high school English teacher in Tampa Bay where he lives with his wife, Elba.