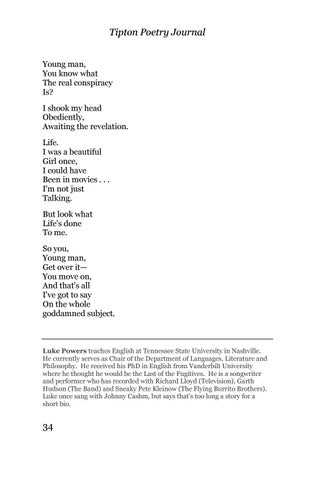 Tipton Poetry Journal Young man, You know what The real conspiracy Is? I shook my head Obediently, Awaiting the revelation. Life. I was a beautiful Girl once, I could have Been in movies . . . I'm not just Talking. But look what Life's done To me. So you, Young man, Get over itâ&#x20AC;&#x201D; You move on, And that's all I've got to say On the whole goddamned subject.

Luke Powers teaches English at Tennessee State University in Nashville. He currently serves as Chair of the Department of Languages, Literature and Philosophy. He received his PhD in English from Vanderbilt University where he thought he would be the Last of the Fugitives. He is a songwriter and performer who has recorded with Richard Lloyd (Television), Garth Hudson (The Band) and Sneaky Pete Kleinow (The Flying Burrito Brothers). Luke once sang with Johnny Cashm, but says thatâ&#x20AC;&#x2122;s too long a story for a short bio.