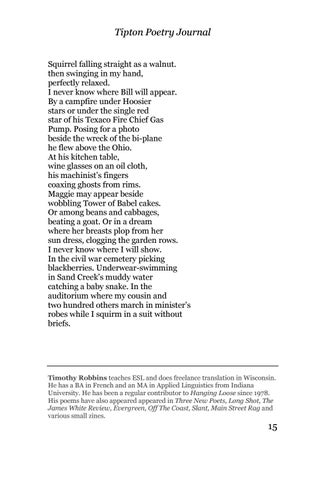 Tipton Poetry Journal Squirrel falling straight as a walnut. then swinging in my hand, perfectly relaxed. I never know where Bill will appear. By a campfire under Hoosier stars or under the single red star of his Texaco Fire Chief Gas Pump. Posing for a photo beside the wreck of the bi-plane he flew above the Ohio. At his kitchen table, wine glasses on an oil cloth, his machinist’s fingers coaxing ghosts from rims. Maggie may appear beside wobbling Tower of Babel cakes. Or among beans and cabbages, beating a goat. Or in a dream where her breasts plop from her sun dress, clogging the garden rows. I never know where I will show. In the civil war cemetery picking blackberries. Underwear-swimming in Sand Creek’s muddy water catching a baby snake. In the auditorium where my cousin and two hundred others march in minister’s robes while I squirm in a suit without briefs.

Timothy Robbins teaches ESL and does freelance translation in Wisconsin. He has a BA in French and an MA in Applied Linguistics from Indiana University. He has been a regular contributor to Hanging Loose since 1978. His poems have also appeared appeared in Three New Poets, Long Shot, The James White Review, Evergreen, Off The Coast, Slant, Main Street Rag and various small zines.